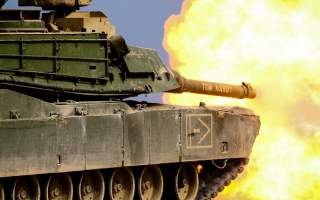 The service plans to pick two vendors in the next few months to build prototype vehicles as an initial step toward having one vendor start full-rate production in 2025.

“Our plan is to award up to two contracts. Each vendor will build 12 vehicles and the we will down select from two to one. When we go into production, we will build 504 vehicles,” David Dopp, Army Program Manager, Mobile Protected Firepower, told reporters at the Association of the United States Army Annual Symposium.

Current Abrams tanks, while armed with 120mm cannons and fortified by heavy armor, are challenged to support infantry in some scenarios due to weight and mobility constraints - such as deploying rapidly by air or crossing bridges in a heavy firefight.

Senior Army leaders say that Infantry Brigade Combat Teams (IBCTs), expected to operate in a more expansive battlespace, will require deployable, fast-moving close-to-contact direct fire support. Service and industry developers say the MPF is being engineered with a medium-class, yet strong 105mm cannon; this will enable attack units to destroy some enemy tactical and combat vehicles as well as infantry formations and some buildings or support structures.

Also, while likely not able to match the speed of a wheeled Stryker vehicle, a “tracked” MPF can better enable “off-road” combat.

An M1A2 Abrams tank can typically be pushed to speeds just above 40mph - yet wheeled Strykers, Humvees and other combat vehicles can easily travel faster than 60mph. Therefore, engineering a vehicle which does not slow down a time-sensitive infantry assault is of paramount importance to MPF developers.

“MPF has to keep up with infantry. We did a lot of tracked and wheeled vehicle studies, and that is what led us to identify it as a tracked vehicle,” Dopp said.

The Army has a near-term and longer-range plan for the vehicle, which Dopp said still needs to integrate the best available Active Protection Systems. Service leaders

“We have a two pronged approach. We are trying to develop systems for the next fight and the fight after next with Next-Gen Combat Vehicle. At the same time, we want to modernize our current fleet to fight any war until we get there,” Maj. Gen. Brian Cummings, Program Executive Officer, Ground Combat Systems, told Warrior Maven in an interview.

Also, rapid deployability is of particular significance in areas such as Europe, where Russian forces, for instance, might be in closer proximity to US or NATO forces.

On mobile protected firepower the Army said it wanted a 105 they were really interested in having alot of firepower down range for those light skinned medium kinds of tactical vehicles.

General Dynamics Land Systems, is one of several industry offerings for the Army to consider. GDLS weapons developers tell Warrior Maven their offering is an evolution of its MPF Griffin I demonstrator vehicle unveiled several years ago.

“We did it with Griffin 1 for Mobile Protected Firepower it was a powerful tool for us to go back and redesign what we thought the Army really wanted,” Michael Peck, GDLS Director of Business Development, told Warrior Maven in an interview.

Other industry bidders include BAE Systems and SAIC. BAE’s offering is based upon improvements to the Army’s M8 Armored Gun System.

“Our infantry fights in close terrain, urban areas and remote locations, so a smaller lightweight vehicle that still provides superior protection was essential to the design of our MPF offering,” Jim Miller, director of Business Development at BAE Systems Combat Vehicles business, said in a company written statement.

For its vehicle, SAIC has formed an industry partnership; its offering includes an ST Kinetics armored vehicle chassis and a CMI Defense turret, SAIC data says.

The Army’s new lightweight MPF armored vehicle is expected to change land war by outmatching Russian equivalents and bringing a new dimension to advancing infantry as it maneuvers toward enemy attack.

When asked if the MPF deployment plans will mirror Army plans to send Strykers to Europe as a deterrent against Russia, Dopp did not rule out the possibility.

“MPF will go to support IBCTs….whatever they encounter,” Dopp said.