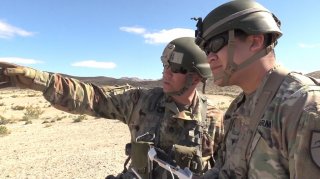 The Army has achieved breakthrough levels of networking, targeting, and high-speed sensor to shooter pairing during its latest Project Convergence exercise in Yuma, Arizona.

Military officials have learned through this exercise that although an enemy’s unmanned aircraft approaching for attack from beyond the radar horizon might not be seen or detected through line-of-sight radiofrequency signals or radar fields of view, a surveillance plane or fighter jet might be in a position to detect that threat and relay information about it. Project Convergence’s ability to connect previously incompatible communications formats is the underlying technical achievement. The Army has shown that this can be done via systems with common standards and by using devices capable of receiving and transmitting multiple frequencies and in various formats to enable communication from otherwise incompatible technologies.

For example, a mini-drone helicopter, ground combat vehicle, surface ship and commanding control centers may use different methods to transmit data. So the Army has taken measures to streamline the sharing of fast, secure information between otherwise disparate or disconnected pools of data. Artificial intelligence and computing adjustments have made possible this communications alignment, which is known as “convergence.”

“The notion of convergence is taking sensors from multiple services and multiple units and tying them to some type of command and control capability using artificial intelligence to move data very quickly,” Gen. John Murray, the commander of Army Futures Command, said following the conclusion of Project Convergence 21, according to an Army transcript.

The Army’s engineers aim to create “gateways” or systems able to convert, translate, pool or combine different streams of incoming data. Once the incoming data is pooled together, it can be organized, analyzed and processed by artificial-intelligence-empowered computer algorithms performing millions of functions per second. The Army, with the assistance of artificial intelligence, would then be able to pinpoint moments of relevance amid limitless volumes of information, bounce that information off a large database of past battlefield scenarios and threats, perform near real-time analytics, and present potential solutions or courses of action to the military’s decisionmakers.