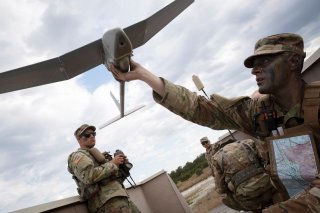 (Washington D.C.) The Army is working with industry partners to upgrade and expand its counter-drone fight by helping to bring new advanced technology to U.S. allied countries across the globe facing an increasingly complex threat. The effort includes industry moves to offer emerging counter-drone systems for international sales, the addition of advanced interceptors and emerging uses of AI -- all as part of a cutting edge effort to destroy attacking drones.

Enemy drones, even low-tech ones, are not only widely available but extremely dangerous to ground forces in today’s modern warfare threat environment. While many countermeasures already exist or are in rapid development, persistent innovation is now being prioritized by the Pentagon, in an effort to stay in front of adaptive enemies pursuing fast-expanding avenues of attack. The U.S. Army is now improving existing drone defense weapons and moving quickly to deploy new ones, such as interceptor missiles, networked ground sensors, laser weapons and EW, among other things.

At the same time, while many medium, large and longer-range drone countermeasures have reached substantial levels of maturity, smaller vehicle attack drones, described as Group 1 to Group 3, present unique and still somewhat unresolved challenges. Drone swarms, for instance - such as commercially-available quadcopters - can be flown in groups to overwhelm radar systems, blanket areas with ISR or even themselves function as mini attack explosives or airborne IEDs.