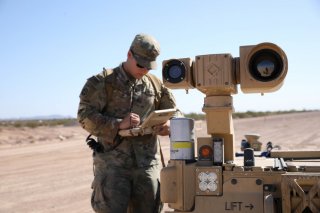 The Army’s recent technological breakthrough, demonstrated at its Project Convergence 2021 technology test in the Arizona desert, is leading to the rapid adoption of a new generation of warfare technologies. But more than that, it's inspiring the conceptual process needed to write a new Army doctrine.

As technologies emerge and evolve, new tactics emerge. New strategies take shape and the Army finds itself in the position of working to author a new generation of warfare doctrine.

“The last big transformation the Army did was really the 1980s. If you go back to the 1980s you talk about the big five—the M1 Abrams, the Bradley, the Apache, the Blackhawk, and missile systems. What we’ve really done over the last 40 years is we have improved those systems,” Army Chief of Staff Gen. James C. McConville said during an event following Project Convergence 2021, according to a transcript.

The doctrinal approach formulated during those critical Cold War years was largely based upon a concept known as AirLand Battle, an approach to warfare aimed at integrating air and land power into coordinated attack maneuvers on the European Continent to stop a Soviet invasion. The idea was to fortify both offensive and defensive mechanized ground forces with suppressive area fire and direct attacks from the air to thwart enemy advances and open up avenues of attack for advancing forces.

Now, decades later, the combat landscape is of course dramatically altered to a point where an all-domain approach is necessary to prepare for modern threats. This means combat doctrine will need to account for air, sea, land, space, and cyber domains in any effort to author a new generation of Army doctrine. This transformative shift in thinking and doctrinal approach is rapidly gaining momentum following the breakthroughs demonstrated during Project Convergence 21.

“I think what you will see is new doctrine—all domain operations at the joint level. This will include multi-domain operations for ourselves integrated with joint all domain command and control, but combined. We’re never going to fight alone,” McConville said.