The Army Is Laser-Focused on Developing Long-Range Precision Fires 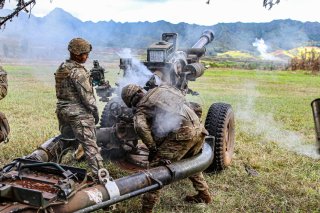 Robotic attack weapons, space-based attacks, cyber intrusions, and artificial intelligence-enabled warfare are all key factors anticipated to inform future warfare into the 2040s and beyond. Although U.S. Army futurists have a solid grasp on many of the technological trends now informing research for warfare in the coming decades, many scientists and weapons developers are quite clear that future warfare will present the unexpected. Capabilities that have not been developed yet are being incorporated into wargames run by senior weapons developers.

The former commanding general of Army Futures Command previously told the National Interest that the expectation is for a “hyperactive future battlefield,” a term I recently discussed with a current senior U.S. Army weapons developer.

“The future battlefield is going to be hyperactive, complex, and lethal in ways that we can only begin to imagine now. We know that our peer competitors have spent the last twenty-plus years investing in capabilities that offset our distinct advantage,” Maj. Gen. John Rafferty, director of the Long Range Precision Fires Cross-Functional Team at Army Futures Command, told the National Interest in an interview.

Future warfare will also be more dispersed thanks to the extended ranges of emerging weapons and sensors operating with new cyber, electronic, and space-based technologies. Rafferty, for instance, oversees the development of key long-range ground fires programs, such as the emerging Extended Range Cannon Artillery, which is capable of firing precision rounds as far as seventy kilometers. The U.S. Army is also developing a first-of-its-kind long-range weapon called the Precision Strike Missile, which is being tested at ranges greater than 500 miles.

These kinds of technologies, coupled with advanced research in the services’ laboratories, are now influencing preparations, wargames, and planning central to the U.S. Army’s efforts to prepare for future conflicts.

“Our vision of the future battlefield is still beginning to take shape as we look at the continued investments that our peer competitors are making. We look at the proliferation of long-range systems and sophisticated air defenses across both theaters. … in the European theater and certainly in the INDO-PACOM theater. We recognize that we've got to deliver systems that begin to deny our adversaries that distinct advantage of overmatch,” Rafferty said.