The Army Moves Into 2022 With Modernized Equipment 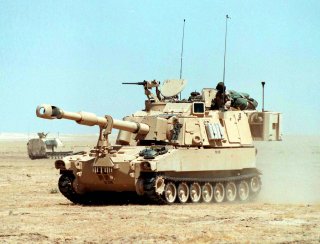 Robots, tanks, self-propelled artillery and infantry carriers are all arriving in Army operational units in 2022. In fact, some military officials are calling next year “the year of the armored vehicle.”

The investments the Army made in modernization over the past eight to ten years are coming to fruition in 2022, Brig. Gen. Glenn Dean, the Army’s program executive officer of ground combat systems, said. Dean told the National Interest the Army will be fielding the Bradley A4 to its 8th Brigade, which is also receiving upgraded Abrams tank.

The developments are timely given that the Army is making unprecedented breakthroughs in the realm of networking, artificial-intelligence-enabled data sharing, and reducing sensor-to-shooter time.

The Army’s light tank, the Mobile Protected FirePower platform, will be taking a huge step forward as the Army makes selections for the next phase. Additionally, the military service is planning large-scale “soldier touchpoint” tests with its fast-emerging ten-to-fifteen-ton armed medium Robotic Combat Vehicle. The Army will receive its first upgraded Self-Propelled Howitzer 155-millimeter artillery cannon. Also, the Army is breaking new ground with its new Optionally Manned Fighting Vehicle. The Army has awarded several development deals to defense contractors for architect designs for its new infantry carrier. This effort is heavily focused upon digital engineering and computer simulations and is intended to provide the conceptual and technical foundation for the first Optionally Manned Fighting Vehicle prototypes.

Each of these emerging platforms is engineered to a unique set of requirements for specific missions. There are a few interesting threads of conceptual and technological continuity running through all of them. Many of these vehicles are being built to fight in a multi-domain battlefield and exchange surveillance and targeting specifics with fighter jets, drones, dismounted units and perhaps even Navy ships.

“We need armored vehicles on the battlefield,” Maj. Gen. Ross Coffman, director of the next-generation combat vehicle cross-functional team at Army Futures Command, told the National Interest. “We need them in places of really, really dangerous position. And ‘22 is going to launch the United States above any other country in the world based on the efforts that in the entire team we’re doing today.”