The Army Needs to Upgrade Its Tanks 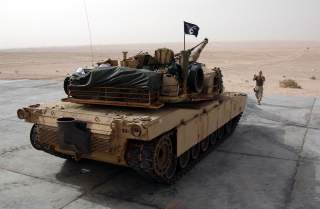 From the outset, the Trump Administration has been committed both to rebuilding America’s military and revitalizing the industrial base that supports it. The White House understands that these two objectives are intimately related. Since the end of the Cold War, chronic under-funding resulted in a military that today is relatively unready, particularly for high-end conflict, and increasingly obsolescent. This same lack of funding for production and sustainment caused the aerospace and defense industry to consolidate and contract. It also forced many companies to make the painful decision to reduce their research and development (R&D).

During this same period, regional and near-peer competitors were investing in both traditional defense products and advanced technologies designed to achieve superiority vis-a-vis the U.S. military. Russia, for example, has been engaged in a decade-long, comprehensive program to modernize its conventional force structure. Now it poses a credible threat to NATO. According to the Chief of Staff of the Army, General Mark Milley, U.S. ground forces are out-ranged by Russian tanks and artillery: "It's close. It's not overly dramatic but it's the combination of systems — we don't like it, we don't want it — but yes, we are technically outranged and outgunned."

Much attention focuses on Russian and Chinese investments in next-generation platforms and weapons designed to give them decisive superiority over the U.S. and its allies. The new Under Secretary of Defense for Research and Engineering, Michael Griffin, among many senior Pentagon officials, has emphasized the need for the U.S. defense establishment to meet this prospective danger by upping its game in such areas as hypersonics, artificial intelligence, big data analytics, robotics and additive manufacturing.

The U.S. Army has created a series of cross-functional teams (CFTs) charged with regaining U.S. overmatch in such areas as long-range precision fires, soldier lethality, air and missile defense and next-generation combat vehicles. The CFTs are looking to achieve a 10x increase in combat capabilities by exploiting advances in R&D, many coming from the commercial economy. The Army also recently announced that it would locate its new Futures Command in Austin, Texas, now considered one of the nation’s premier centers for technology innovation, particularly in information technology and computing.

While the Department of Defense (DoD) must develop the advanced technologies for the military of the future, it must also ensure that U.S. armed forces are ready to fight and win today’s conflicts. This means fielding the most capable aircraft, vehicles and ships that current technologies can provide as well as a defense industrial base that can both sustain the existing military and, in the event of war, ramp up production and repair damaged platforms and systems.

To meet the twin goals of addressing current military capability gaps and reinvigorating the defense industrial base, the Trump administration’s two-year defense budget makes major investments in the procurement of military hardware, including armored fighting vehicles, fighter aircraft, helicopters and missiles. It does so with an eye towards investing in critical portions of the defense industrial base.

A prime example of the White House’s commitment to both the military and the industrial base is its decision to substantially increase the production of the latest variant of the Abrams main battle tank. In Fiscal Year 2019, the Army will receive 135 Abrams tanks in the state-of-the-art M1A2 System Enhancement Package Version 3 (SEPv3) configuration. This is sufficient to annually equip 1.5 of the Army’s total of 15 Active and National Guard Armored Brigade Combat Teams (ABCT).

This work will be done at this country’s sole tank production facility in Lima, Ohio. It is worth noting that this is the same facility that the Army and some in Congress repeatedly sought to shutter after the Cold War. For years, the Lima facility and a shrunken workforce have survived on a trickle of upgrade and repair work.

The decision to fund a significant increase in production of the SEPv3 version of the Abrams, if sustained, will have both near and long-term positive impacts on the U.S. Army and its supporting industrial base. In the near-term, it will help to restore the combat advantage of the ABCT and enable the Lima plant and its suppliers to operate at an efficient rate of production. For the long-term, this investment will set the stage for introduction in a few years of an even more capable version of the Abrams, the SEPv4, and put the tank industrial base and associated workforce on a trajectory towards the eventual production of next-generation armored fighting vehicles.

Several members of the House of Representatives from Ohio and Michigan signed letters to the White House supporting the increase in Abrams production. In one of these, provided by the office of Ohio Congressman Mike Turner, the benefits of sustained higher rates of production are succinctly laid out:

There are significant advantages to maintaining Abrams production at 135 tanks in fiscal year 2020 and beyond. This goal will provide newer, better tanks to our service members faster. Additionally, modernizing 135 tanks reduces the cost of each tank by more than 10 percent and maintains the tank industrial base across the United States.

As the letter notes, it is vitally important to maintain a high level of tank production in the future. At the current rate, it will still take more than a decade to completely outfit the Army’s ABCTs. If anything, the Administration should further increase production of the Abrams and upgraded version of the other armored fighting vehicles that make up an ABCT – Bradleys, Paladins and Armored Multipurpose Vehicles.