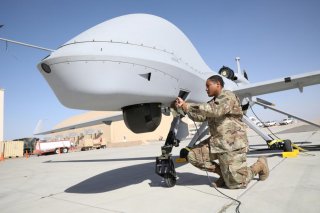 The Army has completed an extensive series of warfare experiments in Arizona intended to create next-level combat decisionmaking by sharing targeting and information across the military services.

The Army recently completed its second Project Convergence exercise at Yuma Proving Grounds in Yuma Arizona. In this year's Project Convergence, the Army aimed to greatly expand its networking capabilities to include Air Force and Navy nodes across a joint combat network. Army systems such as Integrated Battle Command System (IBCS) are specifically geared toward connecting, pooling and analyzing threat data from land and air to quickly establish a “target track” on an approaching threat and cue the best interceptor.

“If there’s an incoming missile attack, first we want our systems to be able to identify it,” Army Chief of Staff Gen. James McConville said in an Army press statement.

Prior to Project Convergence 21, the Army-led IBCS program successfully linked sensor data from an Air Force F-35 jet with ground-based radar systems networked into a meshed system of interconnected sensors. It seems likely that expanded Project Convergence 21 air-ground connectivity might have hit new levels during the experiment.

Last year’s Project Convergence showed that fifth-generation aircraft F-35 fighter jets flying in the sky were able to exchange time-sensitive combat data with maneuvering soldiers on the ground. This kind of joint connectivity and high-speed sensor to shooter pairing represents the Army contribution to the Defense Department’s Joint All Domain Command and Control program. The program essentially mirrors or aligns with what the Army is doing with Project Convergence but on a wider scale. It is centered upon the goal of forming an interconnected “meshed” network of air, sea, land, cyber and space nodes able to share data across the military services in real-time.

Looking ahead at Project Convergence 22, McConville said the Army plans to expand the exercise to include U.S. allies and partners.