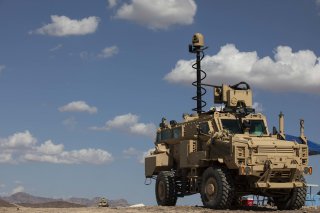 The Army’s Project Convergence 21 live-fire war experiment in the Arizona desert replicated a scenario in the Indo-Pacific region to test the joint land-air-maritime warfare connectivity required to operate in that part of the world.

The overall aim of this year’s Project Convergence experiment, which took place at Yuma Proving Grounds, was to allow the military to assess and prepare for multi-domain warfare in an area where there are vast ocean spaces, island chains and coastal regions.

“The Indo-PACOM scenario enabled our naval forces, the Navy and the United States Marine Corps, to bring in some of the key technologies and concepts that they would focus on strengthening the joint aspect of it,” Gen. John Murray, the commander of Army Futures Command, said upon completion of the exercise, according to an Army transcript.

Taiwan, Japan and islands in the South China Sea are all potential target areas for China. The People’s Liberation Army could launch countermeasures amid another grab for nearby territory. That’s why cross-service deterrence and threat detection is of utmost importance. The U.S. military’s land-based radars would be able to pick up incoming ballistic missiles headed for Japan or Taiwan or receive targeting information from Navy surface ships to fire interceptors at threats or cue offensive weapons. Warfare conducted across maritime, land and air domains are certain to be critical in any scenario much less the Pacific region.

There will be scenarios in the future where the Navy and U.S. Marine Corps are in a position to identify, organize and transmit data to aircraft with artificial intelligence capabilities and assets on the ground. For example, this scenario would be critical if Chinese fighter jets were based on island areas in the South China Sea along with ground-based surface-to-air missiles. Air Force drones or surveillance aircraft would be in a position to identify the location of enemy targets and send details about them to ships or amphibious platforms in a position to attack. Artificial-intelligence-enabled computers could then bounce new threat information off of a vast database to perform analysis, compare threat conditions to past battlefield scenarios, and make valuable recommendations to the military’s decisionmakers.