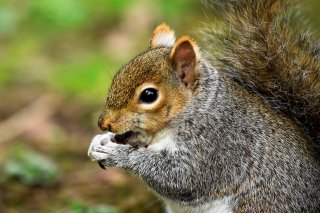 Squirrels seem to jump, land, maneuver and adjust to their environment in milliseconds. They perch and adjust mid-flight in what appears like a wondrous accomplishment to the observing human eye. How do they move so quickly and know exactly where to jump? How do they know how high and far to jump or how to land in an optimal way? We marvel at their dexterity and sheer responsiveness.

Army scientists have taken notice of this ability and embarked upon ambitious research to help determine and study the natural biological mechanisms that make squirrel agility possible. They are doing this in the hopes of engineering more “creative intelligence” within robots.

“Squirrels need to be adaptable, associated with how stiff, long or flexible their launch might be, or how uncertain a landing position might be,” Dean Culver, an Army Research Office program manager, told the National Interest. “The suddenness or quickness of their landing, perching and grasping is remarkable. Studying this might help explain how we can give robots some versatility in decision-making.”

When it comes to creative or certain kinds of varied and nuanced decisionmaking, squirrels possess attributes that far out-perform humans and may offer valuable insights when it comes to engineering robots to better “adapt” creativity to their surroundings.

The most advanced robots, Culver explained, cannot make these kinds of immediate adjustments to their surroundings. “If we want them (robots) to perform a task, we have to tell them all the steps and how to do it,” he told the National Interest. “They can’t accommodate variability.”

For example, Culver further elaborated that squirrels seem to possess an internal mechanism of some kind that enables them to instantaneously adjust to things they have never seen before. The Army Research Office is working to quantify, understand and quantify this ability.

There has been a fair amount of ongoing work with this kind of research, which is often referred to as “biometrics.” For example, as far back as several years ago, Pentagon researchers were closely exploring the flocking and flight pattern of birds and bees in an effort to discern new insights of use in the development of drone-swarming algorithms. Somehow swarms of birds and bees follow elaborate and fast-moving flight path adjustments in close proximity with one another, yet there is never a collision. Why? What kind of biological phenomena makes that possible? Perhaps researchers learned significant things of value to scientific efforts to engineer new programs for successful drone swarm flight.

This program with squirrels, if quite different in application, seems similar in concept.

“When we scan through the natural world, we find a lot of organisms that dramatically out-perform human capabilities,” Culver said.