The Army Is Testing a Devastating New Weapon: A Super 'Bazooka' 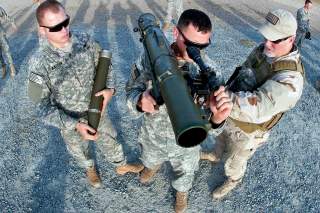 It’s not a rocket launcher, exactly. But the Carl Gustaf can fire rounds which have a tiny rocket to boost them farther. A wide variety of ammunition ranges from high explosives, anti-tank warheads, smoke and eviscerating flechette darts.

In 1946, two Swedes named Hugo Abramson and Harald Jentzen designed the Carl Gustaf, which at the time appeared to be just another recoilless rifle like the famous bazooka. Many of these weapons fell out of use in the following decades as anti-tank missiles took over.

But the Carl Gustaf stuck around — and for a different role than Abramson and Jentzen had planned in the 1940s. For one, it’s now just as much an anti-infantry weapon owing to its range, low cost and types of ammunition.

Soldiers are fond of the 84-millimeter Carl Gustaf, and it’s easy to see why. The weapon is quite practical for dismounted infantry — especially at long ranges — and creates a thrilling blast, so it’s fun to shoot. The U.S. Army had a handful in service with Special Operations units, and they proved so popular that the Army began distributing them widely.

Not bad for a weapon with its first design dating back 70 years. Of course, a lot has changed in seven decades.

The Army is even testing a new version of the Carl Gustaf called the M4, known in the United States as the M3E1. To put it simply, it’s a really powerful rifle that vents pressure from the blast — which propels the round — from a port in the launcher’s rear.

It would be absolutely unwise to stand behind a Carl Gustaf when one goes off.

It’s not a rocket launcher, exactly. But the Carl Gustaf can fire rounds which have a tiny rocket to boost them farther. A wide variety of ammunition ranges from high explosives, anti-tank warheads, smoke and eviscerating flechette darts.

The war in Afghanistan had a lot to do with the Carl Gustaf seeing a revival in U.S. service. Militants harassed American troops from long ranges and from behind cover, making it hard to shoot back. A missile from an orbiting aircraft or a shoulder-fired Javelin launcher would reach far enough, at a cost of around $80,000 per missile.

A single Carl Gustaf round costs — at most — around three percent as much, and carries an effective range of 1,000 meters if it’s a rocket-boosted round. So it’s no wonder why the Army loves it.

Fundamentally, the launcher’s design hasn’t changed. Saab, the weapon’s Swedish developer, is pitching the M3E1 as a collection of evolutionary improvements optimized for urban warfare. It’s slightly smaller and weighs around 15 pounds, seven pounds lighter than the current M3.

The M3’s weight is one thing soldiers don’t tend to like about it. And since modern soldiers wear a lot more headgear, Saab tweaked the design to be more ergonomic and adjustable. Awkward is not a feeling a soldier wants to have when firing a high-explosive round in an urban firefight.

The M3E1 also features an interface for “intelligent” sights, allowing soldiers to program air-bursting rounds to explode above a precise point.

Remember that the Carl Gustaf’s selling point is that it’s cheap, simple and brutal on the battlefield. Eventually, it will wear out. So Saab added a device which records how many times the launcher has been fired.

The problem with the current M3 is that U.S. Army requires its soldiers to mark in a notebook how many times they fire. This number must be exact. If there’s confusion over a specific M3’s firing history, the Army cuts that weapon’s service life in half.

In any case, the Pentagon could start buying the M3E1 as soon as late 2017 once the Army is done with testing and likes what it sees. If so, it could keep the Swedish recoilless rifles blasting away for decades to come.