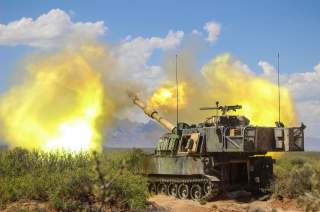 Key point: The rise of near peer threats, and newer technologies commensurate with larger budgets and fortified military modernization ambitions, have created an entirely new war environment confronting the Army of today and tomorrow.

“PGK-M will provide enhanced performance against a broad spectrum of threats. In addition, PGK-M will be interoperable with the Army’s new long-range artillery projectiles, which are currently in parallel development,” Audra Calloway, spokeswoman for the Army’s Picatinny Arsenal, told Warrior Maven in a statement last year.

The rise of near peer threats, and newer technologies commensurate with larger budgets and fortified military modernization ambitions, have created an entirely new war environment confronting the Army of today and tomorrow. Principle among these circumstances is, for example, China’s rapid development of Anti-Satellite, or ASAT weapons.

This circumstance inevitably creates the need for both precision and long-range strike. As one senior Army weapons developer with PEO Missiles and Space told Warrior Maven in an interview in the Fall of 2017 -- Brig. Gen. Robert Rasch -- …”it is about out-ranging the enemy.”