The Army Wants a 'Cannon' That Can Attack from 1,000 Nautical Miles Away 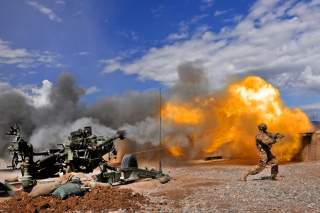 Brace yourselves: the Army is exploring the rapid development of a long-range strategic cannon that can reach out and slap a target at a range of up to 1,000 nautical miles, per Military.com, a range comparable to Pentagon’s existing arsenal of Tomahawk cruise missiles.

- "We are looking very hard and starting down the path of hypersonics and also looking at what we call the Strategic Long Range Cannon, which conceivably could have a range of up to 1,000 nautical miles,” or 1,150 miles, Murray told lawmakers, adding that the Army intended of returning “both cannon and rocket artillery into our formations.”

- For comparison: the Tomahawk Land Attack Missile (TLAM) cruise missiles used for land-attack warfare — like, say, pummeling alleged Syrian chemical weapons sites — offer a range of between 700 and 900 nautical miles, or between 800 and 1000 miles, according to the Navy.

- When this long-range cannon might see combat is, like all other ambitious weapons systems, up in the air. But Murray testified that the service had managed to knock a whole five years off of its development process with regards to the Army’s maneuver short-range air defense systems (MSHOARD) thanks to new rapid acquisition guidelines which could accelerate the futuristic cannon’s development.

- “The initial estimate was we could field one in 2025. We are now down to [fielding] four battalions in fiscal year 2020,” Murray said of the Army’s MSHORAD development timeline, per Military.com. “The requirements process was done in 90 days, as opposed to the three to five years.”