The ARMY Wants a New, Lighter "Tank" That Can Be Transported by Plane 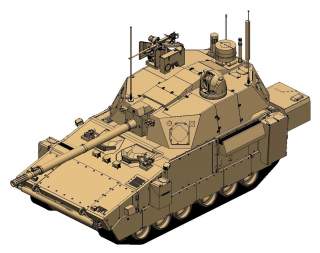 Key point: Tanks are heavy and expensive to produce, but a lighter vehicle with long-range fire would be easier to transport and build.

The US Army is taking a substantial next step in the accelerated development of a new Mobile Protected Firepower lightweight armored vehicle - designed to support infantry combat teams in fast-moving combat situations.

The service, which plans to build prototypes in the next several years, is now beginning to evaluate industry proposals for the new vehicle which seeks to combine rapid deployability, maneuverability and maximum survivability for crew members in combat.

Army developers tell Warrior Maven the new armored vehicle is expected to change land war by outmatching Russian equivalents and bringing a new dimension to advancing infantry as it maneuvers toward enemy attack.

Senior developers with the Army Research Laboratory have told Warrior Maven about cutting edge efforts to both lighten weight of combat vehicles while simultaneously emphasizing mobility. In fact, as part of this effort, two MPFs are being built to fit on an Air Force C-17 aircraft.

"Making a vehicle lighter weight and more capable requires a multi-function effort. For instance, you can integrate an antenna into the armor protection," Karl Kappra, Chief of the Office of Strategy Management for the Army Research Lab, told Warrior Maven in an interview.

“Mobile Protected Firepower helps you because you can get off road. Mobility can help with lethality and protection because you can hit the adversary before they can disrupt your ability to move,” Rickey Smith, Deputy Chief of Staff, G-9, TRADOC, told Warrior Maven in an prior interview on the subject..

BAE Systems is a major player among a handful of industry developers submitting proposals; BAE tells Warrior Maven they have succeeded in submitting a proposal for consideration by the Army.

General Dynamics Land Systems and SAIC are also among major vehicle manufacturers planning to compete to build the vehicle.

BAE has developed and built a vehicle that is currently going through internal testing. The company will submit the vehicle to the Army on April 2 to undergo additional U.S. government testing as a part of the bid assessment process, company developers said.

“We worked closely with our manufacturing and supply network to identify modern technology that has already been fielded or has been through qualification testing,” said Jim Miller, director of Business Development at BAE Systems’ Combat Vehicles business, told Warrior Maven. “This allows us to integrate new technology into a proven design to help meet the Army’s capability and schedule requirements.”

Specifically, BAE developers have explained a few detailed elements of their proposal, to include modifications to a type-classified M8 Armored Gun Systems. The effort, company officials describe, seeks to build upon prior investments in the weapon.

Army plans for the vehicle emphasize expeditionary warfare as part of the services' broader pivot to ongoing preparations for major power, large scale mechanized force on force warfare. While this type of training and preparation has always been a key part of the Army calculus, major land war against a near peer adversary is taking on newer urgency in light of today's threat environment. This includes efforts to update traditional Combined Arms Maneuver tactics in response to rapid Russian and Chinese military modernization.

As part of this, the Army is now putting a much higher premium on rapid deployability as both a deterrent and modern combat tactic, should the service need to quickly mobilize to address threats. Countering Russian aggression on the European continent, for instance, is a primary example of current Army efforts to strengthen its force posture and train with allies in the region.

Smith did not elaborate on any precise weight, but did stress that the effort intends to find the optimal blend of lethality, mobility and survivability. Senior Army leaders, however, do say that the new MPF will be more survivable and superior than its Russian equivalent.

In recent years, lighter weight armor composites have been a central focus of Army developers, at places such as the Army Research Laboratory, for instance. While naturally many details of the vehicle configurations are not available, these kinds of initiatives are indeed likely to figure prominently. In addition, speed and increased mobility are also a major survivability enhancing developmental tactics, Army developers have explained to Warrior Maven.

​In light of these kinds of near-peer adversaries with longer-range sensors, more accurate precision fires and air support for mechanized ground assault, the Army is acutely aware that its maneuvering infantry stands in need of armored, mobile firepower.

This includes the rapid incorporation of greater computer automation and AI, designed to enable one sensor to perform the functions of many sensors in real-time, Kappra said. For instance, it’s by no means beyond the imagination to envision high-resolution forward-looking infrared (FLIR) sensors, electromagnetic weapons and EO-IR cameras operating through a single sensor.

In fact, the Army’s Communications Electronics Research, Development and Engineering Center (CERDEC) is already building prototype sensors - with this in mind. In particular, this early work is part of a longer-range effort to inform the Army’s emerging Next-Generation Comat Vehicle (NGCV). The NGCV, expected to become an entire fleet of armored vehicles, is now being explored as something to emerge in the late 2020s or early 2030s.One of the key technical challenges when it comes to engineering a mobile, yet lethal, weapon is to build a cannon both powerful and lightweight enough to meet speed, lethality and deployability requirements.

​U.S. Army’s Combat Vehicle Modernization Strategy specifically cites the need to bring large caliber cannon technology to lightweight vehicles. Among other things, the strategy cites a lightweight 120mm gun called the XM360 – built for the now-cancelled Future Combat Systems Mounted Combat System. While the weapon is now being thought of as something for NGCV or a future tank variant, its technology bears great relevance to the MPF effort – which seeks to maximize lightweight, mobile firepower.