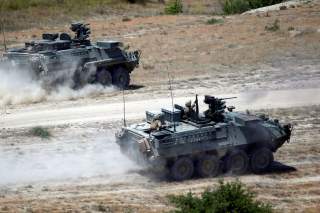 Key point: Moscow is still declining, whereas Beijing is set to pass Russia in land power in the next 10-15 years.

What Happened: The U.S. Army Transition Team (ATT) has called for the Army to shift its primary focus from the European theater to the Asia-Pacific theater, Task & Purpose reported Sept. 20, citing an internal ATT document.

Why It Matters: If the Army follows through on the ATT's request, it would mean that all three of the U.S. military's primary services are now prioritizing the Asia-Pacific. Beyond further intensifying the competition with China, such a move could result in a heightened U.S. focus on developing bases in the western Pacific and, potentially, a decrease in U.S. engagement in Eastern Europe to deter a Russian land push westward.

Background: The ATT document notes that Washington should maintain a minimal level of forces in Europe to deter Russia but shift the bulk of its strategic focus and efforts toward China — arguing that Beijing will surpass Moscow's land force capabilities between 2028 and 2035. The U.S. Navy and Air Force are already heavily focused on securing the maritime theater in the Pacific, with the U.S. Army playing the primary land-based role in Europe.

U.S.: Army Recommends Shift in Focus From Russia to China is republished with the permission of Stratfor Worldview, a geopolitical intelligence and advisory firm.