The Army Wants To Transform Paratroopers Into Airborne Sensors 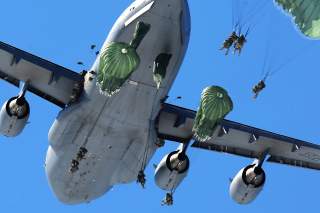 Hanging from a parachute 25,000 feet up, a paratrooper can see for miles and miles.

That's why the Army wants to attach sensors to paratroopers and airdropped cargo bundles: as the troops and supplies descend through the air on their parachutes, the sensors will use their elevated perch to scan the terrain and detect whatever enemy nastiness is waiting on the ground below.

"Airdropped soldiers and supplies have a unique high altitude perspective with clear sensory views of impact areas and assembly points," explains the Army research solicitation. "Airdropped units and assets will have direct line of sight beginning at 25,000 AGL [above ground level] in direction of travel out to 2 miles."

The sensors will take in visual, acoustic, infrared and radio frequency data. The "primary focus for system is threat areas up to 2 miles (at altitudes of 20,000 feet) forward of direction that airdrop systems are heading," with a minimum field of view of 45 degrees and ideally 90 degrees, according to the Army.

The system is aimed at high-altitude paradrops from up to 25,000 feet, and with high glide ratios of 3 to 1. It will link into U.S. tactical networks, where it will display icons of enemy forces to friendly squad and platoon leaders, as well as battlefield commanders. This will enable U.S. troops to call in fire on threats to the airdrop. In addition to integrating with airdrop system, the sensors "may interface with drones, weather balloons, helicopters and any number of ground vehicles as well as being implacable [emplaceable] on tall buildings and hilltops."

As a guide, the Army points to "vehicle mounted gunshot localization systems, vehicle sensors, and radio detection systems in fighter aircraft systems." But acknowledging that vehicle- or aircraft-mounted sensors might be a bit heavy for a paratrooper or commando to carry, the Army specifies that the system "must fit within the operational constrains of an airdropped unit."

Phase I of the project calls for vendors to explain how they will attach sensors to parachuting soldiers and cargo, how those sensors will link to tactical networks and how they might be tested on platforms like a weather balloon. Phase II will involve prototypes.