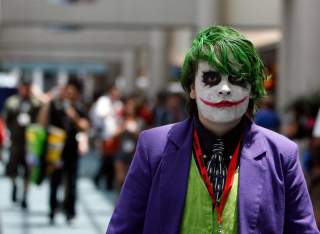 The U.S. military issued a warning to service members reportedly about the potential for mass shootings at showings of the new “Joker” movie.

The warning was widely distributed to military service members after the Federal Bureau of Investigation reportedly uncovered alarming social media posts from “incel” sources, according to Gizmodo. “Incel” is a term referring to a subculture of involuntarily celibate men who typically harbor extreme feelings of hatred toward women.

The email notification went out Sept. 18, instructing service members to “identify two escape routes” while inside of movie theaters as well as to “run, hide, fight” if they encounter a shooter, according to Gizmodo.

“Run if you can. If you’re stuck, hide (also known as ‘sheltering in place’), and stay quiet. If a shooter finds you, fight with whatever you can,” the notice read, Gizmodo reported.

Another memo was sent Monday, issued by senior Army officials in the criminal investigations division, saying the Army had received “credible” intelligence from Texas law enforcement personnel concerning “disturbing and very specific chatter” over the dark web “regarding the targeting of an unknown movie theater during the release.”

“The internal law enforcement information was obtained from the Joint Crime Information Center, Texas Department of Public Safety. The Fort Sill CID office did so out of an abundance of caution to help keep our Soldiers and their families safe,” Chris Grey, chief of Public Affairs for the Army Criminal Investigation Command, said in a statement to the Daily Caller News Foundation. “At this point, we are not aware of any information indicating a specific, credible threat to a particular location or venue.”

The warning explained that incels “idolize the Joker character, the violent clown from the Batman series, admiring his depiction as a man who must pretend to be happy, but eventually fights back against bullies,” according to Gizmodo.

Five family members of victims of the July 20, 2012, shooting that occurred at a showing of “The Dark Knight Rises” in Aurora, Colorado, signed a letter to Warner Brothers Studio expressing their concerns over the new movie featuring the Joker character. The letter, a copy of which was obtained by the Hollywood Reporter, specifically asked the studio to donate to gun victims charities.

“We are calling on you to be a part of the growing chorus of corporate leaders who understand that they have a social responsibility to keep us all safe,” the letter read, according to the Hollywood Reporter.