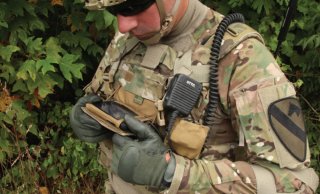 The Army and defense industry are working on new “gateway” technologies intended to combine, merge, and “translate” information from otherwise incompatible incoming sources of data.

Under hostile fire in combat, soldiers may receive information from a number of places at one time. For example, soldiers might receive location specifics from the other side of a mountain through a soldier-worn GPS receiver; targeting details from thermal sights and soldier night-vision goggles; and input from a commander through a Radio Frequency (RF) signal. Yet they are all coming in different technical formats and configurations. How can they be synchronized and organized in relation to one another in real-time?

To address this challenge, the Army has been evolving several “gateway” computing systems and data protocols to ensure different streams of incoming data are organized, combined, and integrated into a single picture on a handheld device for soldiers on the move in combat.

The Army is quickly gaining experience through ongoing efforts to enable greater data sharing and interoperability. Recently, the service achieved breakthrough levels of networking, targeting, and high-speed sensor to shooter pairing during its Project Convergence 21 Program in Arizona. This was accomplished in large measure through the use of common data standards, messaging formats, and certain gateway technology able to connect otherwise separated information streams.

The Army is now working with the defense industry to improve this kind of technical capacity for its GPS-enabled, hand-held Nett Warrior device, a mini-tablet designed to give platoon commanders real-time, integrated data with force position icons on a moving map, intelligence information and other critical details.

Interestingly, the Fischer Connector’s Group Hub does not contain a radio signal or email any kind of electromagnetic waves, something that makes it somewhat stealthy in that it does not give off any kind of detectable signal or signature potentially detectable by an enemy

“Soldiers will have less of a detectable signature if all their devices communicate over wires, rather than by radio. There is not any need for more signals coming off the soldier's body. The Wearable Tactical Next-Generation Hub does not emit a signal of any kind. The hub’s software can be upgraded to maintain compatibility with new and existing technologies,” a Fischer Connectors Group official said.