The Army's Anti-Tank Javelin Missiles Are Getting A Range Upgrade 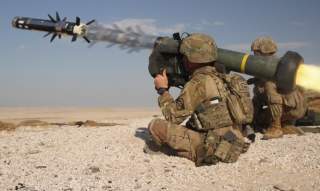 Key Point: These major war combat preparations inspire much of the focus for Army Futures Command, an entity focused upon an anticipated future warfare environment.

(Washington, D.C.) A small group of maneuvering infantry soldiers will soon be able to target and destroy enemy tanks at night from distances up to 4.5 kilometers -- by firing portable, man-carried Javelin Anti-Tank Missiles engineered with a new generation of targeting optics.

The U.S. Army and Raytheon plan to enter production of a new Lightweight Command Launch Unit for the Javelin designed to bring a new level of “precision lethality to an infantry squad.” The new Lightweight CLU unit enables much greater standoff distance for infantry attacking tanks by doubling the attack range from 2.5km to 4.5km, developers said.

“You have to be able to speed up the kill chain, and detect the adversary before he can detect you. You want to get a launch shot off before he knows you are there. It all starts with sensing,” Tommy Boccardi, Javelin Domestic Business Development, Raytheon, told Warrior in October.

"Javelin's strategy is to incrementally develop, test, and integrate new technology into the system. Javelin recently completed a development program that included a new warhead, which improves lethality against soft targets," the Javelin Product Office told Warrior in a statement last month.

The Army has had Javelin anti-tank missiles for many years, yet without this targeting range, sensor fidelity and computer enabled “fast lock” for improving attacks on the move.

Of course Army units have a range of methods with which to attack tanks, such as firing tank rounds or using precision airpower. There may be many combat circumstances, however, wherein dismounted infantry are not traveling with larger mechanized armored units or have access to close air support. While the Army is now accelerating technologies aimed at providing Infantry Brigade Combat Teams with more mobile firepower -- with platforms such as its now-in-development Mobile Protected Firepower vehicle -- dismounted infantry regularly operate in high-risk, forward locations detached from larger mechanized units.

“Our doctrine is we visually ID before we shoot. In this case you have an electronic sensor providing targeting data to the gunner,” Boccardi said.​

The new Lightweight CLU, therefore, introduces a new sphere of combat tactics by enabling infantry to operate in dangerous environments and attack enemy armored vehicles from safer, more protected ranges. Soldiers could use the terrain or urban environments to conceal their firing location before shooting at enemy tanks and repositioning to a new area. For example, a longer-range strike option for the Javelin allows dismounted infantry to attack armored columns from hidden positions, without exposing tanks or air assets to closer-in enemy fire. Scout or recon units could be fortified with a new measure of standoff mobile firepower as well.

The emerging Lightweight CLU weapon will first go to U.S. Special Operations Forces and Army Infantry Brigade Combat Teams before possibly reaching a wider distribution. Both Army Infantry and SOF often operate on foot in small units such as A-teams, recon units or soldiers tasked with clearing buildings in urban areas. Low Rate Initial Production of the Lightweight CLU is slated for 2021. There is also a command and control “networking” dimension to the CLU, as it can operate with a Sentinel radar in some instances and use its sensing systems to share targeting information.

Interestingly, using dismounted infantry to attack enemy tanks can be traced as far back as WWII, according to a 1985 essay from Fort Leavenworth’s U.S. Army Command and General Staff College, Combat Studies Institute. The challenges of facing the fast-advancing offensive tactics used by Nazi Panzer tanks made defensive postures extremely difficult and complicated. During these years, the essay maintains, Allied forces discovered the merits of using dismounted infantry for “offensive” counterattack against the approaching tanks. In essence - meet “offense with offense.”

“The counterattack long has been termed the soul of the defense. Defensive action against a tank attack calls for a counterattack in the same general manner as against the older forms of attack . , . . There is no reason why anti-tank guns, supported by infantry, cannot attack tanks just as infantry, supported by artillery, has attacked infantry in the past,“ the essay, “Seek, Strike and Destroy: U.S. Army Tank Destroyer Doctrine in World War II, states. (Dr. Christopher Gabel).

Of course while tank-on-tank warfare and air-dropped precision fire are indispensable methods of countertank warfare, using infantry presents a few distinct advantages. Not only do infantry attacks upon heavy enemy armor keep mechanized forces at safer distances, but they also free up heavier forces for other tasks such as battlefield maneuver in ways that might be tactically beneficial. Also, it makes sense that these tactics were refined during WWII, given the linear, fast-attack, “blitzkrieg” tactics employed by the Germans; directly countering fast armored attack with armored vehicles introduces a host of difficulties, given the pace and density of assault utilized by Hitler with Blitzkrieg.

Finally, not surprisingly, the essay was written during the height of the Cold War - a time when major force-on-force warfare was the primary concern of war planners. Such is the case again today, as the Pentagon pivots toward its own major-rival war focus. Given this, the Army emphasis upon anti-tank targeting and attack is timely, as it further prepares the service to combat a large mechanized force. Of course while Javelin has uses for counterinsurgency in some respects, it is primarily an anti-tank weapon. The Javelin CLU, it seems clear, is being developed with Chinese and Russian tanks in mind. The Russian’s much-hyped T 14 Armata has not gone unnoticed by the Army, and many are of course familiar with China’s T 99. Much like emerging U.S. thermal sights, armor and advanced ammunition, these rival tanks are quite likely equipped with previously unprecedented armor protection, strike range and ammunition -- all factors which underscore the relevance of the Javelin CLU.

These major war combat preparations inspire much of the focus for Army Futures Command, an entity focused upon an anticipated future warfare environment. Gen. John Murray, Commanding General of Army Futures Command, said the U.S. needs to be ahead of major power rivals to deter warfare and...if needed..prevail in war.

“The Army calls out Russia as a near term threat and China, probably, a way down the road but not far in the future. This is consistent with what we are seeing in both countries in terms of their modernization and structural changes. Especially with China... the way they are revamping their training regime and really focused on taking away our advantages. It is not hard to understand where China wants to be...it is all open source, in terms of where they want to be in 2030. Their modernization efforts are impressive with the investments they are making in things like machine learning, artificial intelligence and quantum computing. This drives where we want to be in the future… “ Murray said.

This article first appeared in October 2019. It is being republished due to reader interest.