The Army's Future Long Range Assault Aircraft: Like a Black Hawk, But Better 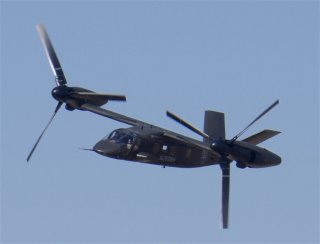 When facing hostile fire and closing with an enemy amid a massive mechanized armor attack, air delivery of infantry and high-speed MEDEVAC could prove decisive, especially in mountainous terrain less navigable by ground vehicles.

Once an initial breach is achieved, either through long-range fires, armored attack, or air support, advancing forces need to be quickly reinforced by large numbers of infantry on the ground to maintain position within an offensive.  This can be done on the ground with infantry carriers or even tactical trucks should terrain be passable, or it could be done by air with C-130 cargo transport planes and helicopters.

However, in a hostile environment wherein arriving forces are confronting enemy ground fire or some kind of heavy resistance, a cargo plane or large utility helicopter might not be survivable enough to enter what Army forces call a “hot LZ” or actively contested Landing Zone.

This potential scenario, wherein terrain or enemy resistance take away tactical options, is likely a huge part of the Army’s concept of operation intended for its new Future Long-Range Assault Aircraft, or FLRAA. The program, intended to fly alongside and augment the Army’s upgraded Black Hawk helicopter, is now airborne with unprecedented speed, agility, and AI-enabled mission systems and computing. The FLRAA, now being developed by Bell Helicopter and Lockheed’s Sikorsky-Boeing, is engineered to travel twice as fast and twice as far as the existing Black Hawk and call upon breakthrough levels of weapons applications, avionics, and radar-signature reducing attributes.

One of the vendors is architecting its platform with a specific mind to target high-speed attack and reconnaissance, while also ensuring a crucial ability to operate in large, multi-aircraft formations needed in major warfare. Lockheed Sikorsky-Boeing’s DEFIANTX is engineered with a Black Hawk-like size configuration to ensure large air fleets of utility and attack helicopters could approach in close proximity if need be. In a major warfare scenario, large numbers of condensed, armed, and low-observable FLRAA aircraft might need to swarm a hot-LZ with high-speed, maneuverability, quick MEDEVAC, and fast-paced infantry delivery to support and sustain a fast-advancing attack.

Just how fast is “high-speed?” Well, the specifics of the DEFIANTX are not available for security reasons, yet is it known to come close to if not reach speeds twice as fast as the 150mph speed of a Black Hawk, an attribute which of course enables commanders with large-scale attack options far more survivable that cargo planes or tactical trucks. In major power future warfare, there are anticipated scenarios wherein high-speed, less detectable, and more survivable helicopters will be needed to quickly deliver large numbers of infantry or add crucially needed close-air support to advancing armored forces.