The Army's M17 Pistol Changes Everything 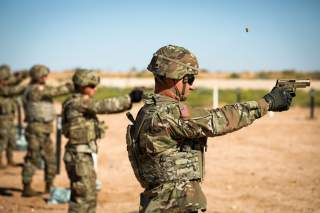 “You can close with the enemy in close quarter combat and engage the enemy with one hand. It is tough to do this with the M9,” Lt. Col. Martin O’Donnell, spokesman for the 101st Airborne, told reporters a few months ago.

This first appeared in WarriorMaven here. This piece was originally published in April 2018 and is being republished due to reader's interest.
Media: DVIDS