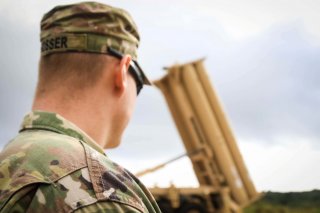 The Patriot, well-known for its Gulf-War ability to track and destroy Saddam’s Scud missiles, has been brought into the modern area through a series of extensive upgrades. The kinetic-energy hit-to-kill Patriot Advanced Capability weapon in particular, has received new software, modern sensors and a special upgrade called Missile Segment Enhancement. The Patriot still has a lot of capability, and can defend against the threats of today and tomorrow. However,  a new radar is needed to defend against the threats warfighters will face the day after tomorrow.

Nevertheless, while the Patriot continues to remain operational and effective in many respects, the decades-old system will start facing challenges when it comes to confronting increasingly advanced-kinds of attacks.

Raytheon weapons developers also explain that the Patriot will also be fielding a new, gamer-style interface that makes the system easier to operate. And the current radar has been modernized as well, better enabling it to detect incoming threats, and discriminate and defend against them, an expert Raytheon developer explained.

The rapid engineering of LTAMDS, accelerated by the Army and Congress, could well be described as the technical or material manifestation of the Army’s strategic approach outlined in the Army Air & Missile Defense 2028 Vision document. The essay specifies some of the more challenging specifics associated with newly emerging drone, helicopter, aircraft and ballistic missile threats. For instance, regarding ballistic missile threats, the Army Vision essay explains that advanced weapons are now engineered with “countermeasures, maneuverable re-entry vehicles, multiple independent reentry vehicles, hypersonic/supersonic glide vehicles and electronic attack.”

Increased maneuverability is also, according to the Army document, a specific concern regarding modern cruise missiles.

Following an extensive, so-called “sense-off” among industry competitors, the Army awarded a deal to Raytheon to produce and deliver the LTAMDS. Raytheon developers tell Warrior that new threats were what informed the firm’s rationale to build an entirely new radar air defense system, rather than merely further upgrading the Patriot.

“The battlefield is not linear. What has happened is threat development. Every time we adapt, potential enemies do something to their threat systems. Cruise missiles, for example, do not have to fly in a straight line,” Bob Kelley, Raytheon's director of IAMD Domestic Programs for Business Development & Strategy, told Warrior in an interview. “The threats are so advanced, we decided we would need something brand new.”

Raytheon engineers recently completed the first round of indoor testing of its LTAMDS antenna, assessing the antenna’s ability to track multiple threats simultaneously.  The new LTAMDS antenna, Raytheon developers explain, is similar in size to the Patriot yet twice as sensitive. To conduct further testing, the array will be mounted onto a precision-machined enclosure.

“It can go off road, through tunnels and bridges. There were some size constraints and weight constraints. Getting a capability that was required to fit into a military aircraft is an engineering challenge,” Kelley said.

The new LTAMDS achieves its margin of difference by, among other things, optimizing power, performance and RF efficiency through the use of a highly-capable semiconducting material known as Gallium Nitride (GaN).

“GAN is a more efficient and more powerful RF transmitter. We are producing military grade ultra-high efficiency GAN. It’s a highly efficient material which does not require as much cooling as a Patriot transmitter does today, because it conducts heat efficiently,” Kelley said. “The array converts material into RF energy to ‘go out and search and detect.’”

The Army’s Air & Missile Defense Vision 2028 puts it this way: “LTAMDS will provide dramatically improved sensing capabilities and address complex integrated attacks. LTAMDS also maximizes the full kinematics of the Patriot missile set. As a state of the art sensor, LTAMDS will mitigate the obsolescence challenges of the Patriot radar.”

The LTAMDS principle advantage, apart from being longer range and more sensitive, is its ability to sustain a track on a fast-maneuvering threat such as a cruise missile

“The challenge with maneuvering cruise missiles is that maintaining a track on them them depends upon how a radar updates.  There is no time for a blind spot. LTAMDS uses three fixed 120-degree arrays.The longer I am looking at a track, the more information I am building up about it. We have no blind spot as there is an overlap between the fixed arrays,” Kelley said.

Stealthy 5th-gen aircraft, which both Russia and China are known to possess, can increasingly operate at lower altitudes with precise air-to-ground weapons. Given their speeds, establishing a consistent radar “track” can seem nearly impossible.

The LTAMDS is, to a large extent, engineered to optimize the use of radar signals which can detect and track small objects or air-vehicle segments with great fidelity at long distances. The faster a ground commander can learn of an approaching threat, the greater the sphere of response options available. Using advanced fire control systems, a LTAMDS can receive an organizing incoming electromagnetic “pings” and produce a “rendering” of a threat object. Precision ground-defense radar such as LTAMDS can generate the shape, size, distance and speed of an approaching threat. Since radio frequency travels at the speed of light, a known entity, and the time of travel can be determined… a computer algorithm can then determine the exact distance of a threat object.

“There is no time for a blind spot now,” Kelley said.