The Army's Next-Generation 50mm Cannon Is Ready To Destroy 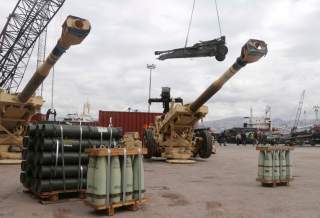 A proximity fuse, for instance, is an existing technology now being adapted to the 50mm, Northrop weapons developers say; it will enable a round to explode in the area of a target instead of attacking in a more narrow or linear way. This kind of blast effect brings a possibility to disperse lethal, explosive materials across a wider area and destroy different kinds of targets such as groups of on-the-move enemy fighters.

Olson explained that the 50mm, in combination with its airburst rounds, will bring a new ability to destroy targets in “defilade” or otherwise not observable to attackers due to an obstruction such as a rock or wall. By exploding at a predetermined point above or near the intended target, airburst rounds disperse lethal explosive material such that it can destroy an enemy hiding behind a rock. While airburst rounds already exist, and can for instance be fired from a Stryker-mounted 30mm gun, the Army and Northrop are adapting the technology to the 50mm.

The existing 30mm cannon can not only arm the Stryker, but lightweight variants can also mount onto thinner-skinned vehicles such as a Humvee or even a pick-up truck. This 50mm cannon lethality effect, as described by Olson, goes beyond this through use of a larger cannon and warhead able to destroy heavier targets.

Significantly, multiple ammunition effects for the new 50mm cannon exist within the same, single form factor – size, shape and general configuration – bringing several attack options into a single size round. This advantage was anticipated in another chapter of the Defence Science Journal essay, which states “it is to be noted that as the variety in ammunition increases due to mission requirements, the dimensions need to be same to achieve uniformity in configuration.”

This emphasis upon ammunition configuration is quite significant, according to Northrop information, which explains that the Bradley’s current 25mm round is “not conducive for the development of advanced ammunition, including “Proximity Sensing ammunition.”

Following some additional live-fire testing to refine some of the mechanics for the weapon, the Army and Northrop plan to work with turret manufacturers to mount the weapon onto armored fighting vehicles for further development. McCollum said that the gun, as a heavier variant of the known Bushmaster chain gun family, should not be too difficult to integrate.