The Army's Plan for a 'Super' Bradley Fighting Vehicle are Dead 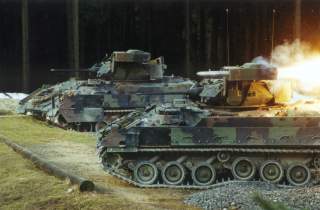 Early in 2018, reports emerged that the Pentagon was considering heavily upgrading its fleet of Bradley infantry fighting vehicles to an M2A5 model with a new 30-millimeter gun turret and capacity for a full nine-soldier squad.

However, an annual report makes clear that M2A5 Bradley concept has been canceled in favor of procuring an even more heavily-armed successor sooner—though the Pentagon is moving ahead with plans for a more agile M2A4 model carrying an Active Protection System capable of intercepting incoming missiles and rockets.

Infantry fighting vehicles (IFVs) like the M2 Bradley boast rapid-fire automatic cannons, long-range anti-tank missiles, and machine guns to provide heavy fire support to the squads of infantry they carry to battle. However, they are less heavily armored than main battle tanks and often have a more limited passenger capacity compared to lighter armored personnel carriers.

Concerns over survivability led the Army to install additional conventional and explosive-reactive armor plates on its M2s, which saw extensive action in both Iraq wars, increasing weight from twenty-five to thirty-three tons. However, the vehicle’s suspension and powertrain were never modified for that additional weight, resulting in the Bradley becoming slower and lacking the electrical generation to incorporate additional upgrades. The weight also pushed the M2’s hull closer to the ground, worsening obstacle clearance and increasing vulnerability to mines and IEDs.

The Pentagon is proceeding with upgrades to the suspension and powertrain implemented through red tape-dodging “Engineering Change Proposals.” These will not only correct the Bradley’s increasing sluggishness but improve its electrical capacity so that it can utilize a state of the art Active Protection System called the “Iron Fist”—which would also add another 1,500 pounds to the Bradley’s weight. In fact, Bradleys used for Iron Fist trials necessarily used components from the M2A4 model.

In December 2018, the Army already announced it planned to rush-outfit an entire mechanized brigade with the Iron Fist. However, a separate testing report indicates that Iron Fist tests in 2018 revealed bugs and “demonstrated an inconsistent capability to intercept threats. Counter-munition dudding and power failures to the launcher were leading contributors to the low intercept rate.”

That doesn’t sound too good, though Iron Fist apparently is more promising than the Iron Curtain APS test on the wheeled Stryker APC, which reportedly regularly failed to prevent “damaging effects,” leading testing to be discontinued. Meanwhile, modifications are being implemented in Iron Fist in hopes of improved results for Phase II of the testing.

Meanwhile, Iron Fist performance aside, Army plans to convert five M2A3-equipped brigades to M2A4 models, and forward deploy the assets for a sixth “brigade set” of M2A4s to Europe for rapid manning in a crisis. Ongoing live-fire tests of the new model’s survivability have so far yielded positive results, and will be complete by 2020.

Meanwhile, more modern IFV designs have incorporated larger auto-cannons, heavier armor, and even large 100-millimeter guns in some cases. As opposing IFVs would likely clash in a high-intensity conflict, the Army views these designs as potentially overmatching the Bradley. Faced between upgrading the Bradley even further or opting for a new chassis, the Army would prefer the money to go to the latter.

Over the last two decades, the land-warfare service spent over $20 billion on two ambitious earlier program, the Future Combat System and the Ground Combat Vehicle, which both failed to yield results before being canceled.

The Pentagon is now hoping that the third attempt will be the charm, as it adopts a new philosophy for its Next Generation Combat Vehicle program: pursue proven, 80 percent solutions rather than accepting much higher costs and risks shooting for “exquisite” designs. Likewise, there is less emphasis on attempting to develop a one-size-fits-all solution for Army vehicles, which in an effort to lower costs has historically resulted in delays with program-fatal results.

Currently, the Army has three major candidates for the Bradley successor, called the Optionally-Manned Fighting Vehicle, which it would like to be capable of carrying both an Active Protection System and a powerful 50-millimeter cannon. These include the BAE’s CV90 Mark IV, Rheinmetall/Raytheon’s KF41 Lynx, and General Dynamics Griffon Mark III—all detailed in this article. As these all trace their lineage to existing, proven designs, and also have baked-in potential for adaptation to secondary roles, the Army hopes it will be able to finally find a Bradley replacement without having to reinvent the wheel.

The OMFV falls under the umbrella of the Next Generation Combat Vehicle projects, which also includes fielding of a lighter Armored Multi-Purpose Vehicle. Basically, the AMPV is a turretless Bradley dedicated to non-frontline combat missions which are nonetheless exposed to enemy ambushes—and serve as armored ambulances, forward command posts and mortar carriers. It should exhibit greater mobility and survivability compared to the aging M113s currently performing these roles, without requiring an expensive, high-risk development program.

Ultimately, opting not to pursue an ambitious lethality upgrade to the Bradley simultaneously to developing the vehicle’s imminent replacement appears a sensible rationalization of funding as the Army attempts to finally implement modernization plans for its mechanized forces that have been delayed by well over a decade. In an era of growing tensions with Russia and China, the Army has made new infantry fighting vehicles its second highest priority, behind only improving its long-neglected artillery arm.