Arsenal Ships! The U.S. Navy’s Missile-Packing Blast From the Past 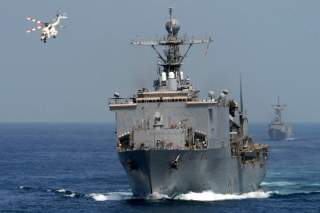 Naval thinkers are coming to terms with the chilling reality that the U.S. fleet probably never will grow to the size planners believe it needs to achieve in order to dominate the seas.

At least one retired officer is dusting off a concept from the 1990s that he believes could help the Navy to concentrate firepower during a future naval engagement -- all without adding traditional warships.

The fleet could acquire arsenal ships, Capt. Robert Rubel proposed in Proceedings, the professional journal of the U.S. Naval Institute. The idea is to take an inexpensive landing craft, add systems for remote control then pack the vessel with launchers for guided missiles.

Alternatively, the Navy could buy old merchant vessels and convert them into missile platforms.

In other words, Rubel wants the Navy to consider investing in firepower without necessarily spending very much on hulls.

Rubel’s proposal comes as the administration of Pres. Donald Trump is proposing deep cuts to the Navy’s shipbuilding accounts starting in 2021. The fleet under Trump’s plan would buy just eight new vessels next year, down from 12 in 2020 and 13 in 2019.

Congress could reverse the cuts. If it doesn’t, the fleet’s slow growth in recent years actually could reverse. Since the final year of Barack Obama’s presidency, the Navy’s goal has been to grow to 355 front-line ships. The fleet in early 2020 has 294 vessels.

The Navy anticipated it would need around $25 billion a year every year through 2049 just for new ships. That's roughly double what the service historically has spent. The Navy in 2019 and 2020 got roughly what it needed in order eventually to grow to nearly 355 ships.

But trillion-dollar annual deficits resulting from the administration’s 2017 tax cuts, and Trump’s diversion of Navy funds to his project to build a wall on the United States’ southern border, both have begun to weigh on the fleet’s finances. Navy leaders in late 2019 began signalling an end to the 355-ship plan.

Rubel advised worrying less about hull numbers and more about missiles. He urged the Navy to consider retaining some of the old LSD-41 Whidbey Island-class amphibious ships that the service plans to decommission in coming years. The fleet could convert the old amphibs into motherships for robotic arsenal vessels based on LCU landing-craft hulls.

“An LSD-41 could lurk in archipelagic waters, sending its LCUs out to launch missiles and then run back to the safety of the narrow channels,” Proceedings explained in a caption on Rubel’s story.

The Navy also could buy up used civilian container ships and install launchers for anti-ship and land-attack missiles. Potentially hundreds of launchers per vessel. These arsenal ships wouldn’t participate in the fleet’s routine deployments and war games. Instead, the Navy would keep them in reserve, perhaps in friendly ports near potential war zones. They would activate only in the event of war.

In proposing a reserve construct for the arsenal ships, Rubel reveals the potential flaw in the plan. While missile capacity is a useful metric for naval power in wartime, it does not translate into naval power during peacetime, when forward patrols and port visits are more valuable than is sheer destructive potential.

A fleet stacked with arsenal ships might be good at waging war, but it could struggle to help prevent war.

This is not the first time arsenal ships have been subject to debate in Navy circles. The concept last gained favor during a previous period of budget cuts in the 1990s. The Navy embraced the concept but, in typical bureaucratic fashion, managed to add complexity and cost to what could have been a simple and inexpensive vessel.

Instead of packing missile launchers into a cheap hull, the Navy designed a brand-new hull, added sensor-defeating features and cut back on the number of missiles. The result was the DDG-1000 Zumwalt class of stealth destroyers.

At around $7 billion per vessel, the DDG-1000s were so expensive that the Navy bought just three of them.