Artillery: King of the Battlefield in Ukraine 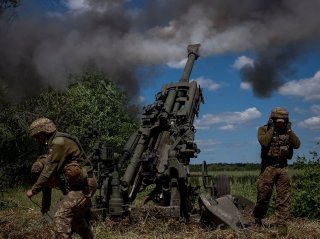 As the shock of the Russian invasion of Ukraine died down and the two belligerents began to prepare for a long and grinding attritional war, it became clear that technology and advanced weapons systems would play a vital role. The West has been systematically sending weapons to Ukraine, from the British Starstreak MANPADS and Turkish TB2 drone to the American-made tank-busting FGM-148 Javelin, and has remained steadfast in its resolve to tip the balance in Ukraine’s favor. But what has also become clear, is that this is a war of artillery, and there are several Western artillery systems that could really help drive back the Russian army along the front.

Since the outbreak of war in Ukraine, artillery has undoubtedly revealed itself to be the most consequential battlefield weapon. High-ranking Ukrainian military personnel have said as much. An adviser to General Valery Zaluzhnyi, Ukraine’s top commander, stated that “anti-tank missiles slowed the Russians down, but what killed them was our artillery. That was what broke their units.” The power of indirect fire on enemy positions miles away cannot be underestimated and if Ukraine is to come out on top in this war, then an acceleration of shipments of modern weapons systems from the West is crucial.

Back on February 24, when Russian VDV airborne forces began to descend on the area around Kyiv, notably the Hostomel airfield just north of the city, Western observers were surprised at the resilience and effectiveness of Ukrainian defenses, as well as the motivation and morale of its defending units.

In spite of the jamming of Ukrainian air-defense radar and the use of E95M Target unmanned aerial vehicles (UAVs) inside Ukraine to confuse defensive anti-aircraft weapons systems, the tactical incompetence of Russian units, coupled with the cogency of Ukrainian artillery, blunted the Russian advance and led to their eventual withdrawal of the area.

In the early stages of the war, Ukrainian artillery divisions achieved tactical victories using Soviet-era howitzers, cannons, and mortars, as well as anti-tank missiles. These include the 2S1-Gvozdika, which is armed with a 122mm self-propelled gun. The Czech Republic has pledged to send a shipment of these to Ukraine, as their forces no longer use them.

Ukraine has also purchased a batch of Dana-M2 Self-Propelled Guns from the Czechs, which has proven itself rather effective against the invading Russian army. Other artillery pieces operated by the Ukrainians included the BM-21, the D-30, and air-defense systems such as the SA-6 and SA-23. All are lower-tech armaments produced in eastern Europe primarily during the Soviet era.

This also highlights a problem for the Ukrainian army: their artillery equipment is either outdated or soon-to-be-obsolete and less effective than modern Western guns developed with state-of-the-art technology. In spite of the good intentions of the Czech Republic, Slovakia, Poland, and other European countries, Ukraine will need much more to effectively push Russian forces back and emerge victorious in what could be a long, drawn-out conflict.

Western Howitzers Could Make a Difference

If Ukrainian forces are going to succeed, they will have to maintain a long-term technological advantage. This cannot be achieved without continued support from NATO, whose member states possess the technological prowess to tip the war in Ukraine’s favor.

One example of a Western armament that can really strengthen the Ukrainian army’s ability to both defend and counterattack is the French-made CAESAR 155mm 52 caliber self-propelled howitzer, already in use in Ukraine though in small quantities. Indeed, President Macron recently declared that France would be sending heavy artillery to Ukraine including the CAESAR, “we are delivering significant equipment, from Milan [anti-tank missiles] to CAESAR [howitzers],” in what has been seen as a key display of support for Ukraine.

The CAESAR howitzer is tailor-made for conventional artillery warfare being fought in Ukraine. Mounted on a 6x6 truck chassis, the gun is mobile, light, can hold up to eighteen rounds, and be operated by as few as three people. It has a firing range of approximately forty-two kilometers (twenty-six miles) using an Extended Range, Full Bore (ERFB) shell, and over fifty kilometers (thirty-one miles) using rocket-assisted shells.

Another advantage of the CAESAR gun is its price tag. At around €5 million per gun, it is about two-thirds cheaper than conventional mounted artillery guns produced by other NATO countries. Simply put, this means three times more guns can be produced which matters greatly in a war of attrition.

The U.S.-made M777 howitzer is another example. With a range of forty kilometers when used in tandem with precision-guided munitions such as the M982 Excalibur GPS-guided munition, it is well-adapted to the terrain of eastern Ukraine. The gun can fire up to seven rounds per minute

“This new package of assistance will contain many of the highly effective weapons systems we have already provided and new capabilities tailored to the wider assault we expect Russia to launch in eastern Ukraine,” Biden said in a statement.

Of course, setting up the Ukrainian army with NATO artillery means providing them with adequate munitions. “Outfitting with NATO howitzers and rocket launchers provides Ukrainian forces with the ability to employ NATO projectiles, rockets, and missiles, which include the best in sensor-fused weapons (such as the German SMArt155mm and the French BONUS), GPS-guided precision rockets, and high-yield precision missiles,” according to Michael Jacobson, as U.S. Field Reserve Army Artillery Colonel.

The CAESAR and the M777 are among the most technologically advanced artillery guns available today. If the Ukrainian army is to drive back the Russians, the continued flow of armaments and munitions should continue. Sustainable weapons systems should be deployed using an integrated logistical structure with operational slickness involving neighboring countries for service and repair. Jacobson argues that sophistication will win this artillery war which, fortunately, NATO has in abundance.