Attack! How America's Paratroopers Will Get Real-Time Battle Maps 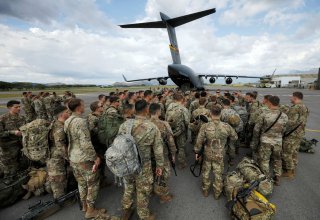 What if U.S. Army Airborne Rangers are moving quickly to seize an airfield for a fast-advancing attack on enemy positions, when they suddenly learn that heavy concentrations of enemy armored vehicles, artillery and troops have just entered the target area? What happens if the paratroopers in transit don’t receive that information in time?

Perhaps they are not equipped with real-time moving digital maps showing terrain and force location information? Perhaps radio communications have been complicated in an austere environment or thwarted due to enemy jamming?

The Air Force is preparing to drop Army soldiers behind enemy lines equipped with the latest and best intelligence information with which to approach missions, due to an emerging high-tech roll-on Tactical Data Link system networking C-17s, C-130s and other combat nodes.

The service recently conducted a simulation exercise involving 75 aircraft overall to assess, prepare and demonstrate a new increased data-transmission rate on a C-17 and drop Army troops deep into enemy territory. The attack scenarios included both C-130s and C-17s.

“This allows us to get instantaneous access to data regarding where people are, what they are looking at and where the bad guys are in the fight. That way we can stay safe and avoid them,” Captain Zac Barry, C-17 instructor pilot, said an Air Force TV Around the Air Force video report.

The C-130s were from Arkansas and Texas, and the C-17s were from South Carolina; the planes shared data and networked to one another throughout the mission, to ensure arriving Army soldiers were fully informed with requisite mission specifics.

If paratroopers needed to land quickly and attack an objective for an offensive assault, raid, or hostage rescue—this technology enables them to land on the ground already having combat relevant details such as location, composition, weapons or force structure of a given enemy location. Having this vital data in transit will give soldiers an ability to view digital maps, battlefield assessments and intelligence information while traveling instead of needing to wait until they arrive.