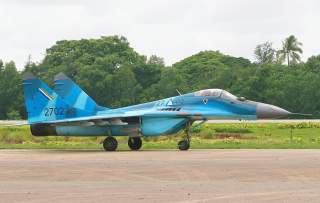 Key point: Myanmar is looking to modernize its air force.

At MAKS 2019, Sukhoi demonstrated the export version of its premier air superiority fighter, the Su-57E. While the existence of an export version was practically guaranteed given that Russia has continually attempted to partner with select nations during development, the export version shown at MAKS should be available to practically anyone who wants to buy it. However, when Myanmar’s ambassador to Russia indicated that they would be interested in the Su-57, it came as a surprise to many defense watchers.

While not tiny, Myanmar’s air force doesn’t have many modern jets. According to The Military Balance 2019, Myanmar’s frontline fighters are a small fleet of MiG-29s, augmented by obsolescent Chinese F-7s. While Myanmar put in an order for six Su-30s in 2018, these fighters are still being delivered.

The recent nature of the Su-30 order is probably why Myanmar is interested in the Su-57. If the government has money earmarked for additional Su-30 orders, this could be easily transferred into Su-57 orders. Surprisingly, the price of the Su-30 is roughly similar to the Su-57. Russian military expert Michael Kofman mentions that most sticker price estimates of the Su-57 are at between 45 to 54 million dollars per unit, though Russia has spent significantly more on the program, per aircraft.

Comparatively, Myanmar’s Su-30SM’s cost between 35 to 50 million dollars per unit. 35 million is at the low end of the price range, and presumably, a Su-30SM ordered in 2018 would have some level of upgrades to stay competitive with newer Su-35 models. It’s likely that Myanmar’s Su-30SMs cost is closer to 50 million for this reason.

As a result, Myanmar could presumably upgrade from the Su-30SM to the Su-57E at relatively low cost for a fighter, with a significant increase in capability. But is the Su-57E well suited to what Myanmar might use it for?

An article in the Myanmar Times stated that the Su-30SMs might be used for the counterinsurgency mission, which is practically ground-attack only role. The Su-57E is a questionable choice for this role. In the Russian Air Force, the Su-25SM3 is the primary ground attack aircraft. It’s heavily armored with tons of hardpoints to carry ordnance, as lowering its radar cross-section is not a priority. For more complex ground attack missions that might involve the heavy use of targeting pods, the Su-34 is used, which features two seats to split the load of operating targeting systems. Both of these aircraft will serve alongside the Su-57.

Unlike the F-35 which features an advanced Electro-Optical Targeting System (EOTS) which can be very useful for ground attack, the Su-57 features no special sensors or provisions for the ground attack role. Its modern cockpit with two very large full-color multi-function displays could be an important asset, but other modern Russian aircraft like the latest version of the Yak-130 also feature such displays.

As Myanmar has also procured twelve Yak-130s as part of earlier contracts, the possible procurement of the Su-57E is probably just a move to increase the potency of the Myanmar Air Force in the air-to-air arena, which it is fairly lacking in with its current fleet of MiG-29s. Currently, the Myanmar Air Force is both qualitatively and quantitatively behind the Thai Air Force, which fields Gripens and F-16A/Bs, which have gotten a somewhat custom midlife upgrade package. The Su-57E would be a tough opponent for both of these aircraft, and could potentially spur India to purchase Su-57Es of their own.