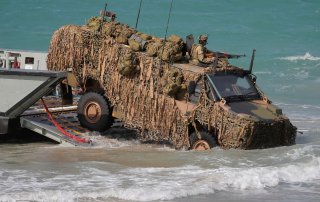 Australia plans to establish an international defense school for the purpose of training the militaries of small Pacific island nations, according to Minister for International Development and the Pacific Pat Conroy—a step likely taken in response to growing fears over Chinese security cooperation with several of the islands.

During his remarks in Suva, the capital of the Pacific island nation of Fiji, Conroy also claimed that Canberra would double its aerial surveillance of Pacific “exclusive economic zones,” a move intended to prevent illegal fishing and increase maritime security. He also claimed that Australia would continue to make efforts in combating climate change, an existential threat for many low-lying Pacific island nations contending with rising sea levels. “The Australian Government knows that the issue of security is inseparable from the issue of climate change,” he said.

The announcement of the defense school was made in the run-up to the Pacific Islands Forum, or PIF, a regional security forum including Australia, New Zealand, and several other small South Pacific island nations. China is expected to dominate the forum’s agenda, as it has already attempted to negotiate security agreements with much of the South Pacific. Although Beijing’s efforts to finalize a security agreement in a meeting last month were largely unsuccessful, it has continued to pursue cooperation with the Solomon Islands, and Western security experts have raised concerns over the risk of a Chinese military presence there, although Beijing has denied this possibility.

While China’s relations in the southern Indo-Pacific region have largely remained cordial, several of the islands continue to maintain official diplomatic relations with Taiwan—a major point of objection for China, which regards Taiwan as a rebellious province rather than an independent state conducting its own foreign policy. One such island nation, Tuvalu, withdrew from the opening of the United Nations Ocean Conference in Lisbon, Portugal, on Monday after the Chinese delegation protested the presence of three Taiwanese citizens with Tuvalu’s group of attendees. Chinese Foreign Ministry spokesman Zhao Lijian remained unrepentant about the incident afterward, declaring that “the Taiwan authorities’ attempts to squeeze into the United Nations Conference on the Oceans and the Law of the Sea by engaging in petty maneuvers in the international arena or acting as followers of other countries will only demean themselves,” according to the South China Morning Post.

The Pacific Islands Forum was initially founded in 1971, and Conroy emphasized in his remarks that the organization remained at “the heart of Pacific regionalism” as it entered its sixth decade.