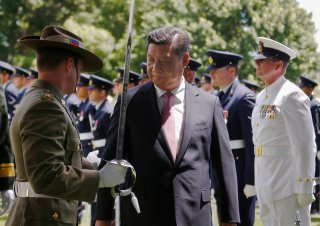 Key point: For the first time since World War II, a major power is deploying military capabilities which could do us harm in our region of primary strategic concern.

Two important military developments recently should give China pause for thought. The first one is the announcement by Prime Minister Scott Morrison of a $1.1 billion upgrade to the Royal Australian Air Force base at Tindal, which is about 300 kilometres south of Darwin, to lengthen the runway so that US B-52 strategic bombers as well as our own KC-30 air-to-air refuelling aircraft can operate from there.

The second development is the announcement by the US State Department that Australia has been cleared, at a cost of about $1.4 billion, to purchase 200 AGM-158C long-range anti-ship missiles (LRASM), which can be fired from our F/A-18 Super Hornets and the F-35s when they are delivered.

The significance of these two developments occurring at the same time should not be underestimated and certainly not in Beijing. Morrison described the upgrades to Tindal as being ‘the sharp end of the spear’ for Australian and US air operations in the Indo-Pacific. As ASPI’s Peter Jennings observed, the decision to expand the Tindal airbase is a giant strategic step forward and could be the basis for a greater leadership role for Australia in the region.

When the upgrade, including major runway extensions, fuel stockpiles and engineering support, is completed, Tindal will be the most potent military base south of Guam. And—for the time being at least—it is beyond the reach of Chinese conventional ballistic missiles.

The LRASMs will give Australia a highly capable stand-off anti-ship strike capability with much longer range than we’ve had before. Unclassified sources state that this missile has a range of at least 500–600 kilometres. It can conduct autonomous targeting, relying on on-board targeting systems to acquire the target without the presence of prior, precision intelligence or supporting data services like GPS.

It’s claimed that these capabilities will enable positive target identification and target acquisition and engagement of moving ships in extremely hostile environments. The missile is designed with countermeasures to evade active defence systems. Apparently, multiple missiles can work together to share data to coordinate and attack in a swarm.

The LRASM is also capable of hitting land targets. Its own data link allows other military assets to feed the missile a real-time electronic picture of the battlespace.

This missile only achieved operational capability with US Super Hornets in November last year. Its confirmation for sale to Australia so quickly reflects the closeness of the alliance.

This is a major new strike-deterrent acquisition for Australia. It reflects the concerns of the defence force about Australia’s strike capabilities since the retirement of the F-111 in 2010 and the fact that it takes time for the navy’s Collins-class submarines to transit to Southeast Asian or South Pacific waters.

We are now in an era in which China is contesting our strategic space in the ‘inner arc’ stretching from the Indonesian archipelago and Papua New Guinea down to Solomon Islands and Vanuatu (the latter of which are about 2,000 kilometres from our east coast military bases). For the first time since World War II, a major power is deploying military capabilities which could do us harm in our region of primary strategic concern. In that sense, we are now in a period of defence warning time because a change of intention is all that a potential adversary would need to do to transform a presence into a direct military threat.

It is therefore important that we have the capability to push back against those who would use their increasing military power to restrict our strategic space and coerce us.

In the coming years we will need to consider acquiring weapons systems with even longer range. The US is developing a ground-launched version of the latest Tomahawk maritime strike missile, a boost glide anti-ship missile, a hypersonic cruise missile and potentially a Pershing III anti-ship intermediate-range ballistic missile. These could have ranges of around 1,000 kilometres to more than 3,000 kilometres. These sorts of weapons would enable Australia to strike at targets well into the South China Sea and the South Pacific.

Some previous RAAF chiefs have been strong proponents of acquiring Northrop Grumman’s B-21 Raider long-range strategic stealth bomber. The project is still in the development stage, but the planes have an estimated cost of around US$550 million each and their maintenance costs will be huge. It would probably be cheaper and more cost-effective if Australia focused on long-range, land-based anti-ship missiles.

Taken together, then, the upgrading of Tindal and the acquisition of LRASMs reinforce the US alliance and foreshadow a significantly more potent Australian deterrent capability to assert control over our own region of primary strategic concern.

Paul Dibb is professor of strategic studies at the Australian National University.

This article by Paul Dibb first appeared in the Australian Strategic Policy Insitute’s The Strategist in 2020 and is being reprinted due to reader interest.