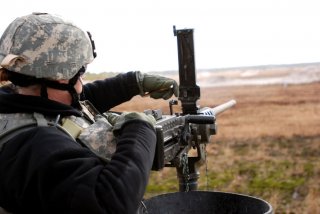 Military thinkers are not always the most forward of thinkers, and this was certainly the case with small arms in the nineteenth century. Initially, the U.S. Army was not sold on the concept of rapid-fire weapons and only adopted Richard Jordan Gatling’s hand-cranked “Gatling Gun” after the Civil War for use on the plains.

But Lt. Col. George Armstrong Custer thought the carriage-mounted weapons were a burden and left them behind when he campaigned against the Lakota in June 1876. There has been much speculation about whether the guns could have changed the outcome of the Battle of Little Big Horn—one might only look to the Battle of Ulundi for an answer.

British military leader Lord Chelmsford (Frederic Thesiger, Second Baron Chelmsford) brought a pair of Gatling Guns on campaign in the latter stages of the Zulu War. Chelmsford is widely remembered for bungling the war effort, including the disastrous loss of British forces at Isandlwana in January 1879—made famous in the movie Zulu Dawn and chronicled in the book Washing of the Spears. Yet, Chelmsford successfully employed Gatling Guns just three years and a week after Little Big Horn at the Battle of Ulundi. The British force of 5,000 lost less than twenty men when it defeated a force three times its size. By contrast, more than 1,500 Zulus died or were wounded.

The British military was among the first to see the potential of the gun created by American-born British inventor Sir Hiram Stevens Maxim. It has since been credited as “the weapon most associated with the British imperial conquest.”

Maxim had already been a prolific inventor, holding patents on mechanical devices like hair-curling irons, a mousetrap, and, most notably, a steam pump. At one point, he even claimed to have invented the light bulb prior to Thomas Edison.

Like Edison, Maxim was a tinkerer who wanted to become wealthy from his inventions. It was during a trip to Europe when he met with a fellow American who told Maxim, “Hang up your chemistry and electricity! If you want to make a pile of money, invent something that will enable these Europeans to cut each other’s throats with greater facility.”

Maxim took that suggestion to heart and, using his understanding of steam pumps, devised a recoil system for firearms. The system took the energy of one shot and created a weapon that could fire nonstop. Maxim had created the first truly successful machine gun, the Maxim Gun.

If the Brown Bess and Martini Henry rifles built the British Empire, then the Maxim Gun allowed it to expand and gain mastery of the battlefield. The weapon played a significant role in 1893’s First Matabele War in Rhodesia (modern day Zimbabwe) where 700 soldiers and five Maxim machine guns helped fend off 5,000 warriors.

Just five years later, at the 1898 Battle of Omdurman in the Sudan, the British employed fifty-two Maxim guns and modern artillery against a force of fanatical Mahdist warriors carrying mostly swords and spears—and still wearing antiquated chain mail. It was this engagement that truly demonstrated the killing potential of the machine gun. Few Mahdist warriors were able to get within fifty yards of the British and, when the battle was over, 12,000 Sudanese were dead, 13,000 more were wounded, and 5,000 were captured. On the other hand, British losses were fewer than fifty dead and less than 400 wounded. It was arguably the most one-sided battle in modern history.

Maxim Guns were subsequently used by both sides in the Second Anglo-Boer War, likely the first conflict in history where opposing armies had machine guns. The weapons certainly contributed to the high causalities on both sides.

The role of the machine gun in colonial wars, as well as in the Russo-Japanese War and the Spanish-American War, among other conflicts, should have signified the weapon’s devastating killing power. Yet, it was almost as if military leaders were unaware that sending their young men across open fields in the early weeks of the First World War would result in devastating carnage. Clearly, the lessons from those other conflicts weren’t learned, or at least they weren’t not taken to heart.