Autonomous Vehicles Will Forever Change How the Army Fights and Wins 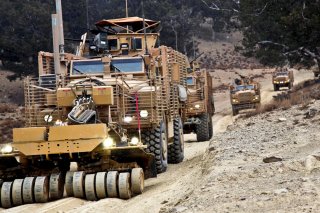 Protecting high-value Army convoys traveling through high-threat areas are a highly difficult task. However, what if soldiers could focus on the threats posed by potential enemy ambushes or improvised explosive devices and conduct forward reconnaissance to map the optimal path forward without having to worry about driving?

Increasingly, military vehicles can drive autonomously with minimal human supervision.  Years ago, the U.S. Army successfully demonstrated an advanced, autonomy-enabled capability called “leader-follower” algorithms. Essentially, an unmanned or driverless truck can be programmed to precisely follow the maneuvers and route of the manned vehicle in front of it. Advanced algorithms enabling autonomy could guide, direct, and drive vehicles behind the vehicle in front. This technology, which was pioneered more than fifteen years ago, has recently seen new paradigm-changing breakthroughs.

“Where we are now, a manned leader vehicle can have up to 10 robotic, completely unmanned vehicles behind it, and those are operating with soldiers today on a prototype experimentation level,” Kevin Mills, deputy executive director of Ground Vehicle Intelligent Systems at the Army Ground Vehicle Systems Center, told The National Interest in an interview. “The goal, though, is to really remove those two manned vehicles and replace them with an autonomous capability that now allows those same convoys in ever-increasing complexities of mission space to go from on-road to off-road, to be able to execute those convoy missions without humans doing the driving functions. This can allow soldiers to do things like pull security for the convoy. That's something only a soldier can do.”

Tactically speaking, the ability for an autonomous, unmanned front vehicle leading a convoy to perform reconnaissance missions provides a tremendous security advantage. Soldiers can encounter and identify threats without having to place themselves at higher risk at the very “tip of the spear.”

However, despite this progress and autonomy’s growing promise, challenges remain when it comes to ruggedizing autonomous vehicles for military missions.

“We have a pretty significant divergence from where commercial industry is going for ground autonomy, a lot of the things that they rely on in terms of fixed infrastructure, well-mapped roads, understanding rules of the road and road networks don't necessarily apply,” Mills said.

Ground autonomy has long been recognized as an extremely challenging technological undertaking, given that obstacles or other changes in the environment can require instant, dynamic decisionmaking. Responding in relation to other moving objects in a fluid, fast-changing environment can be a challenging task for an autonomous ground vehicle. Autonomy in the air, however, is less complex. Mills explained that these challenges specific to autonomous ground vehicle operation take on a new measure of complexity in combat environments.

“When you start going off-road, in contested environments, and where your enemy gets a vote, you know, you might not have communication, you might not have GPS. I think the place where we're really gonna see autonomy on the ground is being able to expand that operational envelope. Right now we can do it pretty well, when you're in the less contested environments and the off-road terrain isn't too severe,” he added.