Away from Home: U.S. Coast Guard Prepares for the Pacific 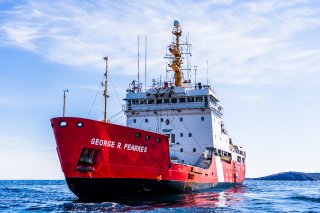 Though not the largest service, the U.S. Coast Guard could still play a significant role in a war with China.

With RIMPAC 2022 now concluded, the U.S. Navy, Marine Corps, and other participants have the opportunity to reflect on the exercise’s success.

RIMPAC, an abbreviation of Rim of the Pacific, is the world’s largest maritime exercise. Held by the U.S. Navy every two years almost continuously since the 1970s, the exercise at sea aims to foster cooperation between the U.S. Navy and allied Pacific countries interested in a free and open Indo-Pacific.

RIMPAC’s importance has surged recently as Pacific nations grow wary of China’s intentions and designs on the Indo-Pacific. Though China is also a Pacific nation, Beijing’s creeping takeover of economically productive areas in the South China Sea has convinced many Pacific nations that it would be better to be prepared than give China the benefit of the doubt regarding ultimate Pacific goals.

And to that end, the U.S. Coast Guard is also upping its abilities at sea.

In a statement, U.S. Indo-Pacific Command explained that the U.S. Coast Guard Cutter Midgett participated in RIMPAC 2022, adding to several firsts the USCG performed during the exercise.

“Midgett was the first Coast Guard Cutter to embark a U.S. Navy MH-60R Seahawk helicopter. The Romeo model of Seahawk features folding rotors and tail, which allows the helicopter to be kept safe in the hangar of Legend-class cutters like Midgett,” the U.S. Indo-Pac Command statement explained.

“This successful test gave valuable information that the Coast Guard and Navy can use for joint operations moving forward. During the exercise, Midgett also conducted flight operations with helicopters from the FS Prairial and USS Chafee. Cross-deck flight operations improve the safety of future rescue and assistance operations.”

Though not as heavily armed as U.S. Navy ships, U.S. Coast Guard ships nevertheless carry a relatively capable suite of abilities that augment the Navy's.

“In the second portion of the at-sea exercise, Midgett played the role of opposing force using shipboard RADAR, the embarked helicopter, and the advanced Link 16 communication system to track and hunt other task force ships. Midgett’s earned nine “constructive kills,” providing targeting information to allied assets resulting in immediate simulated strikes. This phase of the partnership included vessels and assets from the U.S., Japan, Australia, Chile, India, Indonesia, Mexico and South Korea, though the exercise took place in the waters around a fictional nation invented for the exercise.”

So while U.S. Coast Guard ships are not the biggest or most impressive ships at sea, they’re nonetheless preparing to augment the U.S. Navy in a pinch—or in case of a large-scale war in the Indo-Pacific region.