The B-1 Bomber: How America Could 'Sink' China or Russia in a War 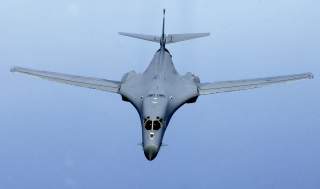 The United States Air Force’s 28th Bomb Wing based at Ellsworth Air Force Base in South Dakota could become the first Rockwell International B-1B Lancer unit to be equipped with Lockheed Martin’s AGM-158C Long Range Anti-Ship Missile. Crews at the base started to train on the new weapon earlier this month.

"The crews were given all the academic training and some of the computer training that goes along with it and as we continue to get the crews qualified they'll do a lot of training in the aircraft as well as in the simulator," 28th Bomb Wing commander Col. John Edwards told KOTA TV.

While Edwards did not disclose an exact timeline for when the new LRASM missile would enter the 28th Bomb Wing’s inventory, the addition of the AGM-158C would give the venerable B-1B a new maritime strike mission.

"It provides combatant commanders out there across the world with a very key anti-ship capability in what we call the counter sea mission,” Edwards told the TV station. “So it's designed to specifically to go against ships and it increases the B-1's lethality and the range at which we can employ this."

The B-1B’s new maritime strike role would be a surprise for the Lancer’s designers in the 1960s.

The original B-1A was a Mach 2.2 capable high altitude strategic bomber designed to deliver a nuclear payload into the heart of what was then the Soviet Union. However, as Moscow’s defenses against high altitude aircraft stiffened and Washington embarked on the development of cruise missiles and stealth technology—particularly the Northrop Grumman B-2A Spirit—then President Jimmy Carter canceled the Lancer project in 1977.

However, the end of the Cold War gave the B-1B a new lease on life. With the Soviet Union a fading memory and the nuclear mission declining in importance, the Air Force disabled the B-1B’s nuclear capabilities and began modifying the massive bomber for the conventional precision strike role. The entire fleet was converted into the conventional role by 2011.

The B-1B remains a potent weapon and has performed well in recent conflicts. Most recently, the bomber was used to launch nineteen AGM-158A JASSM cruise missiles against Syrian targets in retaliation for the Assad regime's alleged chemical weapons attacks this past April. The JASSM, longer-ranged JASSM-ER and the LRASM—which all share the same stealthy missile body—ensures the B-1B’s ability to operate against heavily defended airspace. The Lancer long ago ceased to be a penetrating strike aircraft since modern air defenses are simply too capable for the non-stealthy jet to handle.

The last B-1B will likely leave service by 2036 when Air Force strategic bomber fleet will consist of the B-21 and long-serving Boeing B-52.