The B-21 Bomber Is Heading to the US Air Force 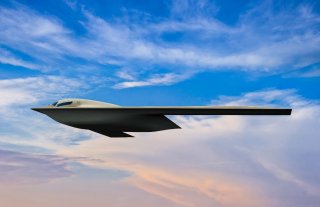 As the B-21 Raider approaches completion, there are just a few things left to do before the bomber’s first flight.

The United States' newest bomber, the B-21 Raider, is nearly ready to take off into the skies for the first time. The airplane is widely considered the stealthiest bomber ever built, with some experts estimating that the strategic bomber could be virtually invisible to enemy radar.

Next of the docket for the bomber? Pre-flight calibration tests.

Right now, the bomber has “landing gear… It’s got wheels on it… It’s got the wings on it. It really looks like a bomber,” Rapid Capabilities Office Director Randall Walden explained to Air Force Magazine.

Pre-flight calibration is a process that essentially makes sure the airplane’s structure is sound and that the aircraft is able to do what it was intended to. When calibration tests are finished, they give the program “great insight into, ‘Did the actual design meet our needs, and did the manufacturing of that meet our needs?’” Walden explained.

From the outside, the B-21 Raider appears to draw heavily from the B-2 Spirit bomber, its developmental cousin. Both aircraft generally share the same fuselage. Broadly speaking, both aircraft use a low-profile flying wing design.

This engineering decision has multiple benefits: first, it reduces the number of surfaces that could potentially reflect enemy radar and cause the aircraft to be tracked during flight. The design also minimizes aerodynamic drag while in flight, a boon to the airplane’s combat radius.

Though both aircraft share a similar fuselage shape, the newer B-21 Raider is expected to be considerably more capable than its B-2 Spirit predecessor. For starters, the B-21’s stealth coating, a classified, radar-absorbent paint, is reportedly more robust than the B-2’s. In addition, while the B-2 requires climate-controlled hangars when undergoing maintenance, the B-21 does not.

Once calibration tests are completed, the Air Force will test out the aircraft by powering up the engines, evaluating the bomber’s hydraulic systems, and virtually “everything you normally do in a ground test to make sure it’s working properly,” Walden explained.

After calibration tests and after pre-flight powerup and further testing, taxiing tests — at both high and low speeds — are virtually the only thing left to evaluate. “Once all that data informs where we stand from a design [standpoint] is when we’ll schedule that first flight,” Walden explained.

Though not quite ready for taking to the skies, the B-21 Raider is quite close — and will soon take to the skies. Although the United States Air Force is understandably tight-lipped about the important stealth bomber, we could see the Raider take to the skies as early as this year.