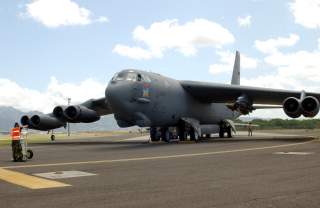 Despite its flaws, the B-52s are still getting the job done and the Air Force clearly thinks they are useful. This is not the true for all of its oldies-but-goodies: the top brass has been pushing to retire the A-10, another aged platform that also shines in low-threat environments.

In 2015, after a B-52 crashed in an accident, the Air Force spent $13 million dollars “regenerating” a B-52H retired to its famous aircraft “Boneyard” in the Arizona Desert to takes its place—simply because $13 million is way less than the cost of any new bomber. (There are still 12 more B-52Hs in reserve in the Boneyard).

Don’t We Already Have Better Aircraft to Replace the B-52?

The Air Force does operate two more modern bombers, the B-2 Spirit stealth bomber and the B-1 Lancer. But neither is poised to completely replace the B-52.

The B-2 Spirit is a stealth plane, which means it has a good chance of penetrating enemy air defenses. That’s highly useful against a peer opponent—but there are only 20 of them in service, they are somewhat temperamental, and they cost $135,000 an hour to fly and maintain, almost twice the flying cost of the B-52. That expense, and the Spirit’s reduced fuel and bomb load, mean that it’s not really ideal to use it as an everyday bomb truck in relatively safe environments nor to serve as a maritime patrol plane, though in the event of war with a peer power, its stealth abilities would certainly pay off. Nor is an undetectable stealth plane great for the whole diplomatic-big-stick mission either!

The B-1B Lancer, on the other hand, does perform largely similar missions to the B-52—and it can carry more munitions, fly 25 percent faster (830 miles per hour), and with less visibility on radar. But in today’s air defense environment, it’s still too visible to be a proper stealth plane, and too slow to avoid interception. So even though it’s better than the B-52, the Air Force still would be reluctant to send it into well-defended environments.

In the end, the B-1—popularly nicknamed “Bones”—have been used quite effectively to deploy laser-guided bombs and cruise missiles from high above, just like the B-52.

The B-1B is generally superior and has a lower operating cost of $60,000 an hour compared to the $70,000 required by the B-52—though it’s also hampered by a lower availability rate. In the end, because the Air Force maintains only 63 B-1s, the B-52s fill in when the Lancers are unavailable . . . or simply need a break, which is how B-52s came to be deployed in the fight against ISIS earlier this year.

But what the future?

The Air Force just announced this year they are going ahead with the procurement of the B-21 Raider—formerly known as the Long Range Strike Bomber. The B-21 is a stealth aircraft that rather resembles the B-2 Spirit.

The idea behind the new B-21 is to have a long-range bomber that can cross Oceans and operate undetected by powerful air defense radars deployed by China and Russia, including low-band radars normally more effective at detecting stealth planes.

It’ll be absolutely huge! Though only figuratively—it’s thought to be slightly smaller than the B-2.

The B-21s are priced at over a half-billion a piece—before the inevitable cost inflations—so you certainly can’t say the Air Force is failing to invest in new technology, though some argue the Pentagon should have negotiated a final price that’s less furtive than the aircraft.

But Doesn’t Russia Have a “Much Newer Capability” Than We Do?

Russia currently operates three types of bombers—the speedy Tu-22M3 Backfire, the even faster and larger Tu-160s Blackjack, and the Tu-95 Bear, all capable, Cold War-era designs. However, none of them are stealth aircraft capable of penetrating enemy air defenses like the B-2 or the forthcoming B-21.

The swing-wing Tu-22M3 can fly over 70 percent faster than the B-1—but at the expense of carrying much less armament and fuel. Speed has not proven a sure defense for the type: one was shot down by Georgian surface-to-air missiles in 2008.

The massive Tu-160 is a sort of swing-winged mega bomber: it can attain Mach 2, can fly even further than the B-1, and can carry nearly as much weaponry. They are also extremely expensive to produce, maintain, and operate. Russia only has 16, many of which are not currently in flying condition. Like the B-1, though it has a reduced radar cross section, it’s not a plane that wants to be anywhere close to enemy air defenses.

Finally, we come to Russia’s sixtyish Tu-95SMs and Tu-142 Bears—which basically serve as Russia’s B-52s. The Bear is just as old (first flight in 1952!), it’s assigned roughly similar missions—maritime patrol, lugging cruise missiles, scaring foreign countries—and it does them pretty well. But the propeller-powered plane is nonetheless slower, intolerably noisy, and carries less than half the bomb load of the B-52.

To round it out, the only other heavy bombers used in extensive numbers today are China’s 120 H-6s, upgrades of Cold War Tu-16s with inferior range and payload compared to the B-52.

Could this “new capability” be referring to something other than bombers? Russia indeed has come out with a lot of new weapon systems recently—but in the air, it’s largely a game of catch-up. Russia’s new Su-35, which is in limited production, may arguably have an edge over the F-15 Eagle, which entered in service in 1976—but not the F-22 Raptor stealth fighter.

Russia is developing its own T-50 stealth fighter. The twelve currently on order would give Russia one-tenth the number of Raptor stealth fighters the United States already possesses in operational units, without counting the newer, though less capable, F-35s.

Arguably, in ground warfare technology that Russia has made some bigger strides with its new T-14 Armata tank, of which 100 are on order. But for now it relies primarily on thousands of T-72s, upgraded versions of the type devastated by U.S. ground and air forces in the 1991 Gulf War.

Russian missiles do appear to have daunting capabilities, including the upcoming sea-launched Zircon missile, the S-400 surface-to-air missile, and the Iskander short range ballistic missile system—the latter a weapon type the Russians rely on more because they can’t assume airpower will do the job for them. And of course, Russia still retains the capacity to bring about a nuclear apocalypse with intercontinental ballistic missiles, just like the United States can.

There’s no denying that Russia has made some major improvements in its military capabilities in recent years, despite its floundering economy. However, the United States spent $597 million on defense in 2016 compared to $87 million for Russia, a disparity of nearly 7 to 1. In many cases, even when Russia has developed promising new technology, it can’t afford to deploy it in significant quantity.

The B-52 is nicknamed the BUFF, which stands for “Big Ugly Fat Fellow” (though in fact a different F-word applies at the end).

However, looks aren’t everything. The B-52 may not do the sexy, stealthy work of penetrating enemy air defenses and dodging SAMs and interceptors, but it does everyday job of hauling tons of ordnance across the globe and dropping it on top of ISIS insurgent bases and Taliban fighters, often at the request of hard-pressed troops on the ground.

Newer, fancier beasts exists for the task—and even more capable ones are on the way—but for now the B-52 does what it does rather well without real need of a replacement. Why toss out something old but reliable that does the job?

This first appeared in 2016. It is being republished due to reader interest.