The B-52 Bomber Will See 80 Years of Service 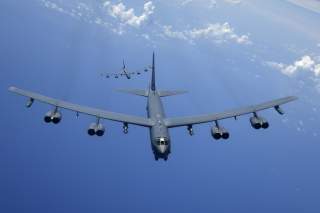 For the second time in four years, the U.S. Air Force has pulled an old B-52 heavy bomber from storage at the Pentagon’s airplane “boneyard” in Arizona and upgraded the once-dormant plane for active service.

The Air Force’s effort to regenerate the eight-engine B-52 underscores the type’s importance as the flying branch revamps its bomber fleet for potential high-intensity warfare with peer states such as Russia and China.

The B-52H with the nickname “Wise Guy” and the serial number 60-034, meaning Congress approved its funding in fiscal year 1960, had been at the 309th Aerospace Maintenance and Regeneration Group at Davis-Mothan Air Force Base in Arizona since 2008.

Col. Robert Burgess, commander of the 307th Operations Group, led the three-man crew that on May 14, 2019 brought the bomber to Barksdale Air Force Base in Louisiana.

The Air Force reactivated Wise Guy in order to replace a B-52 that burned on the flightline following a bird-strike during take-off at Andersen Air Force Base in Guam in 2016. That bomber’s destruction without loss of life dropped the flying branch’s B-52Hs to 75 active airframes, one fewer than the service requires.

In 2015, the Air Force regenerated its first B-52H in order to replace a bomber that crashed in 2014. For that regeneration, AMARG teamed up with personnel from the 2nd, 5th and 307th Bomb Wings, repairmen from the Air Force Material Command and experts from the Defense Logistics Agency.

It’s like that Wise Guy’s reactivation required a similar effort.

Boeing built 102 B-52Hs between 1961 and 1963. They were the ultimate B-52 model and featured more powerful and efficient engines than previous models possessed. The Air Force by the mid-1990s had retired all older B-52s, leaving just the H-models in service. The fleet in the early 2000s stabilized at its current size.

Today the B-52 flies alongside 20 B-2 stealth bombers dating from the 1990s and 62 1980s-vintage B-1s. Even though they are the oldest of the Air Force’s heavy bombers, the branch aims to keep the B-52s longer than it does other current types.

The Air Force plans in the 2030s to retire the maintenance-intensive B-1s and, a few years later, would also retire the “silver-bullet” fleet of B-2s.

The Air Force wants to grow from nine bomber squadrons in 2019 to 14 by 2025. Any expansion of bomber force likely would involve the flying branch buy more than 100 new B-21s.

Under any likely scenario, the B-52 endures. Simple, durable and cheap to operate, the B-52s are the Air Force’s long-range, missile-haulers. The military does not plan for the old bombers to penetrate enemy defenses during a high-tech war. They instead would launch cruise missiles from beyond the range of air defenses.

To keep the old bombers viable, the Air Force is spending $32 billion replacing their TF-33 engines and, as part of the Combat Network Communications Technology upgrade, rewiring their bomb bays for “smart” weapons.

“CONECT gives the B-52 a digital ‘backbone,’ enabling aircrew to receive digital tasking messages and real time intelligence and threat data from multiple sources,” the Air Force explained. “All crew stations on the aircraft will be digitally linked, enabling information sharing while in flight, greatly improving situational awareness and mission flexibility.”

The B-52s likely would be first in line to carry any new hypersonic missiles the Air Force develops.

“AMARG, this is 60-034, a Cold Warrior that stood sentinel over America from the darkest days of the Cold War to the global fight against terror,” someone at the Arizona base scrawled on one of Wise Guy’s panels before the bomber departed for Louisiana. “Take good care of her … until we need her again.”