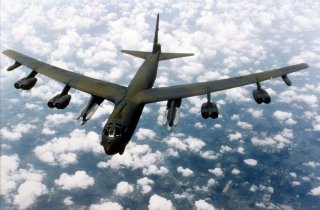 While the 1980s pop band The B-52s went on tour in Europe during the summer of 2019, the U.S. Air Force’s B-52 Stratofortress bombers will be rocking and rolling in theater and flight training across Europe and Africa in the coming weeks. This weekend six of the aircraft from the Fifth Bomb Wing out of Minot Air Force Base, North Dakota, arrived at Royal Air Force (RAF) Fairford, England for the planned training mission.

There have been more than two hundred reported successful flight sorties coordinated with NATO allies and partners since the Bomber Task Force missions began.

“B-52s are back at RAF Fairford, and will be operating across the theater in what will be a very active deployment. Our ability to quickly respond and assure allies and partners rests upon the fact that we are able to deploy our B-52s at a moment’s notice,” said Gen. Jeff Harrigian, U.S. Air Forces in Europe and Air Forces Africa commander via an Air Force statement. “Their presence here helps build trust with our NATO allies and partner nations and affords us new opportunities to train together through a variety of scenarios.”

History of the B-52 in Europe

Even before the Berlin Airlift, British and American military planners saw the need for strategic bombardment capabilities in Western Europe and this included the forward deployment of the B-29 Superfortess bomber in bases in Europe. It was in July 1948 that British prime minister Clement Attlee approved the deployment of American bombers to bases in the UK—which marked the first time the U.S. Air Force would station combat aircraft in another sovereign nation during peacetime.

In the late 1950s, the B-52 Stratofortress made its debut in the UK, while the first B-52s—from Loring Air Force Base, Maine—were deployed to Moron Air Base in Spain, and marked the first such use of a Spanish base.

It was during the 1991 Gulf War campaign that B-52s forward-deployed to U.S. Air Force Bases in Europe (USAFE) conducted coalition operations in Iraq. In recent years, the venerable B-52 has been joined by the newer B-1 Lancer and B-2 Spirit.

Last year a bomber task force of B-52s, along with airmen and support equipment from the Second Bomb Wing, Barksdale Air Force Base, Louisiana, were deployed to the U.S. European Command area of operations to conduct theater integration and flying training. Those bombers were also deployed to RAF Fairford.

Despite the age of the B-52, the Cold War bomber has remained a reliable workhorse for the United States Air Force. There are currently fifty-eight B-52 bombers in active service, with another eighteen in reserve and another dozen or so in long term storage. The bombers have flown under various commands during those sixty-seven years, beginning with the Strategic Air Command (SAC), until it was disestablished at the end of the Cold War in 1992 when its aircraft were absorbed into the Air Combat Command (ACC). Since 2010, all B-52 Stratofortresses fly under the Air Force Global Strike Command (AFGSC).

The B-52 could also be seen to be on a “world tour” of sorts. Over the Fourth of July weekend, the U.S. Air Force deployed a B-52H Stratofortress nuclear-capable bomber to Andersen Air Force Base in Gaum. The bomber, which is assigned to the 96th Bomb Squadron, 2nd Bomb Wing, was deployed from Barksdale Air Force Base—and had flown to Guam in a twenty-eight-hour mission and demonstrated the U.S. Indo-Pacific Command’s commitment to the security and stability of the region.