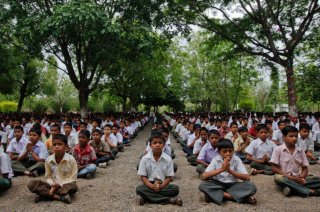 The United Nations announced on Monday that it had officially predicted that the world population—now calculated at 7.942 billion people—would cross eight billion on November 15, 2022. However, it also observed that the global population was growing at its slowest rate since 1950, largely due to low fertility rates in large developing countries such as China and Russia.

The UN’s Department of Economic and Social Affairs, which estimates population statistics for the international organization, released the report—entitled “World Population Prospects 2022”—on Monday, July 11, which the UN has designated as "World Population Day.” In the report, UN Secretary-General Antonio Guterres indicated that the growth rate had fallen below one percent in 2020, likely due to lockdowns prompted by the COVID-19 pandemic.

The UN report also forecasted that India’s population would surpass China’s in 2023, making it the most populous country in the world. Although China, Russia, and other developed and developing countries are expected to lose population in the coming decades due to below-replacement-rate fertility, another eight developing countries—Congo, Egypt, Ethiopia, India, Nigeria, Pakistan, the Philippines, and Tanzania—are together expected to account for half of the world’s population increase in the first half of the twenty-first century. Most of these gains will occur in Africa, the world’s fastest-growing continent, although fertility rates on that continent will also decrease throughout the twenty-first century as living standards improve.

Over the long term, the report loosely estimated that the world population might reach 8.5 billion in 2030, 9.7 billion in 2050, and 10.4 billion by the mid-2080s—a number projected to be the world’s highest population before declining in response to higher standards of living and lower fertility rates.

Since the Industrial Revolution, the global population has increased exponentially. The world’s population is thought to have hit one billion shortly after the beginning of the nineteenth century; within two hundred years, it had increased sevenfold, growing to seven billion by 2011. The UN report argued that the increase had been driven “largely by increasing numbers of people surviving to reproductive age, and has been accompanied by major changes in fertility rates, including urbanization and accelerating migration.”

“These trends will have far-reaching implications for generations to come,” the report concluded.