Back in 2010, the U.S. Navy Surfaced 3 Cruise Missile Submarines (As A Warning to China) 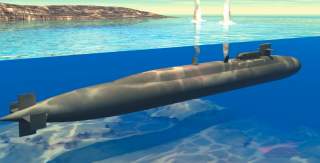