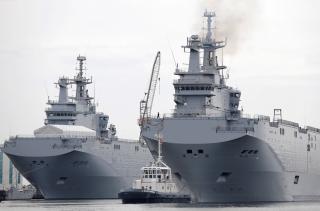 Key point: Paris may have wanted the money, but Moscow surprised everyone by invading Ukraine. Once that happened, France did not want to give such weapons to Russia.

Mistrals comes at roughly half the price of the U.S. Navy’s Wasp-class LHDs at around $600 to 700 million, and thanks to a high degree of automation can function with 160 crew instead of the Wasp’s 1,000. This theoretically should make them appealing for export.