Back in 2016, the F-35 Could Not Find Any Enemy That Could Challenge It 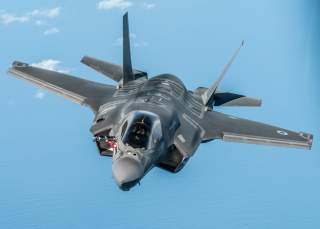 It’s no secret that we are skeptics when it comes to the F-35 Lightning II. The new, radar-evading, “fifth-generation” warplane is years late, over-budget and — by virtue of its many, sometimes contradictory missions — represents a design compromise, meaning it’s okay at lots of tasks but excels at none of them.

Still, the U.S. military plans to replace nearly all of its current tactical jets with as many as 2,400 F-35s at a total program cost, including maintenance, of around $1 trillion.

The U.S. Air Force, one of the F-35’s main proponents, is understandably optimistic about the single-engine, supersonic fighter — at least in public. Perhaps the strongest endorsement came from William Redmond, the executive director of the Air Force Operational Test and Evaluation Center in Albuquerque, New Mexico, back in 2016.

In an unclassified presentation, Redmond claimed he was worried that the F-35 — along with its heavier, twin-engine cousin the F-22 Raptor—would be too sophisticated and capable for the Air Force’s existing test facilities to handle.

“Raptors and Lightnings have voracious appetites,” Redmond stated. “They chew through the adversary with volume and velocity.”

In early June 2016, seven F-35s from Hill Air Force Base in Utah — where the flying branch is getting ready to declare the Lightning combat-ready at the end of 2016 — deployed to Mountain Home Air Force Base in Idaho to train alongside resident F-15Es and A-10s.

During mock combat, the F-35s reportedly shot down eight twin-engine F-15Es, for no losses of their own — this despite the 2015 revelation that the F-35 is inferior to a single-engine F-16 in a simulated dogfight. It’s possible that the Lightning pilots have devised special air-combat tactics that take advantage of the F-35’s stealth and cutting-edge sensors.

According to Redmond, it’s hard to adequately stress the F-35 and F-22 in a simulated combat environment. “Very difficult to generate the threat density and complexity to meet fifth-gen operational test requirements,” he complained.

Of course, the testing problems aren’t entirely a result of the F-35’s alleged superior performance.

The Air Force maintains dedicated “adversary” squadrons whose sole job it is to simulate enemy forces during training exercises. But with the F-35 eating more and more of a flattening budget, the flying branch shuttered one of its then-three adversary units, reducing the number of planes available to play the bad guys during war games.

Besides being short planes to fight the F-35 during tests, the Air Force also lacks realistic simulators for the latest surface-to-air missiles and radio jamming, Redmond stated.