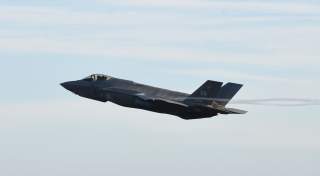 Key point: Given that the U.S. and Israeli air forces are among the most active in the world, sooner or later the F-35 will really, truly see combat.

Did a Russian anti-aircraft missile hit one of Israel’s new F-35 stealth fighters a few years ago?

Pro-Russian media claimed that an Israeli F-35I was hit and damaged by a Russian-made S-200 surface-to-air missile during an Israeli air strike in Syria earlier this month. Israel says one of its F-35s was damaged—after colliding with a bird.

The story begins on October 16, 2017 when Israel announced that its aircraft had struck a Syrian SAM battery near Damascus that had fired two hours earlier on Israeli reconnaissance planes flying over Lebanon. The attack damaged the missile battery, and no Israeli aircraft were hit, according to Israel. Coincidentally or not, the incident happened the same day that Russia’s defense minister, Sergei Shoigu, arrived in Israel for talks with Prime Minister Benjamin Netanyahu and Defense Minister Avigdor Lieberman.