Back to the Future: Russia Is Reviving Its Tu-160 Cold War-era Strategic Bomber 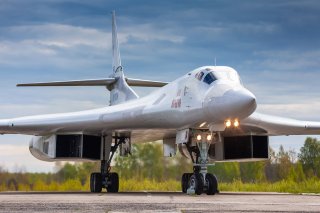 One of Russia’s older bombers is relaunching for modern combat.

Although the Tu-160 first flew in the early 1980s, during the depths of the Cold War, Russia is remaking one of the largest and fastest Soviet bombers.

The United Aircraft Corporation statement covering the Tu-160M explains how difficult it was to restart the bomber’s production line while incorporating some modernized components.

“As part of the implementation of the program under the state contract between the Ministry of Industry and Trade of Russia and Tupolev, the design documentation for the Tu-160M aircraft has been fully digitized in a short time, the vacuum welding technology for titanium products has been restored, the production of airframe units has been resumed, a new cooperation has been formed from leading industrial enterprises in the field of metallurgy, aircraft construction, mechanical engineering and instrument making, the main part of which is part of the State Corporation Rostec.”

A Russian official explained that UAC “restored the full production cycle of the Tu-160, but already in the M modification, using modernized engines, modernized aircraft control systems, navigation systems, and weapons control systems,” no small feat considering the original Tu-160’s engines were the most powerful combat aircraft engines ever built.

This latest Tu-160’s engines are thought to be an evolution of the original Kuznetsov NK-32 engines that the manufacturer, Tupolev, claims boost fuel efficiency by a whopping 13 percent.

“The modernization of the Kazan Aviation Plant played an important role in restoring the production of unique aircraft: the equipment of the shops, the flight test base was updated, the world’s largest installation for electron beam welding and vacuum annealing of titanium was put into operation” Denis Manturov, minister of industry and trade of the Russian Federation explained.

“Today we see significant prospects for the Tu-160 platform: further development will make it possible to use it for new types of weapons, including promising ones.”

Why relaunch old production lines for a Cold War-era bomber when Russia has other, newer options available? The Tu-160s relaunch story is, in fact, a decade old.

Hopes were high for Russia's next-generation PAK DA stealth bomber, which on paper is somewhat akin to the United States B-2 Spirit strategic bomber, a stealthy flying-wing design. However, unlike the United States B-2—or new B-21 Raider—Russia's PAK DA design has not been realized, though a few prototypes may exist.

Until Russia is able to rectify problems with the PAK DA design, the new and improved Tu-160M will serve as an interim bomber.

Though the Tu-160’s relaunch is being heralded in Russian media as a great triumph, the reality is somewhat less rosy: Though re-engined and digitally upgraded, the Tu-160 remains, in essence, a Cold War-era design pressed into service in the twenty-first century.