Bad News: The B-21 Raider Stealth Bomber Is Delayed 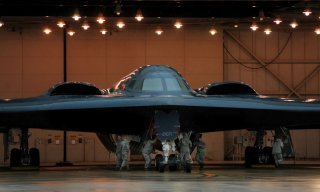 Publicly-available information states that the B-21 Raider is currently undergoing calibration tests in an out-of-lab, outdoor environment. These evaluations will be followed by taxiing tests ahead of the Raider’s first flight.

“Recently, the Air Force released a new estimate for first flight; projected for next year, 2023,” a U.S. Air Force spokeswoman said on May 20. Air Force Magazine first reported the information. The U.S. Air Force added that it is trying to be as “transparent” as possible about the B-21 Raider project, adding that “this estimate reflects the current status of the program.”

However, despite the delay, the new stealth bomber “remains within its acquisition program baseline for cost, schedule, and performance established at Milestone B award, which was based on an independent government estimate for the program.”

Though the U.S. Air Force has released limited illustrations of the new stealth aircraft, there are no publicly-available photographs of the bomber as of yet. However, that could change sometime this year, as the Raider is slated to undergo engine testing outdoors.

“The B-21 program continues to ensure the first flight test aircraft is a high-quality build and production-representative, in order to drive an efficient flight test campaign and rapidly field this critical combat capability,” the Air Force spokeswoman said. The first flight will be “data- and event-driven, not a date-driven event.”

The U.S. Air Force has its hands tied; though it would like to be as transparent about the bomber as possible, keeping a tight lid on the project denies adversary countries like China and Russia from gleaning information about the project that could aid their own indigenous aircraft projects, or reveal specific B-21 Raider capabilities.

U.S.lawmakers seem to be happy with the progress the B-21 is making, by and large, despite the Raider’s hefty $20 billion price tag for the 2022 to 2027 calendar years and $32 billion in total project costs. Though the B-21 Raider is outwardly akin to the B-2 Spirit bomber’s flying wing design, U.S. Air Force officials have said that the Raider’s stealth capabilities are at least two generations beyond the Spirit—currently, the stealthiest bomber ever built.

The Air Force would ultimately like the new B-21 to replace its fleet of B-1B Lancer bombers as well as its B-2 Spirits, though when that happens exactly is unclear. America’s flying branch previously cited the early 2030s for those platform’s divestment, though the Raider’s slight delay could set back those retirement dates somewhat. Though not yet in the air, the Raider program is still on track to offer the United States Air Force an incredibly stealthy and capable strategic bombing platform.