Bad News for Biden: The Taliban Have Issued A Death Sentence 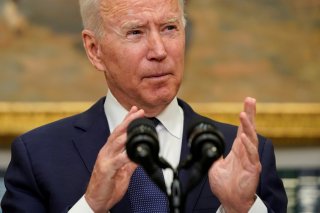 The "buck stops" with President Joe Biden, or so he claimed on the situation in Afghanistan as the United States pulls out its forces. However, Biden has also repeatedly pointed to an agreement signed by former President Donald Trump with the Taliban in Doha, Qatar, and the president has maintained that it bound him to withdraw forces.

The problem with trying to cast blame on the previous administration is that it had a so-called "escape clause" that could have allowed the United States to withdraw from the accord if the Afghan peace talks failed—which they did. Biden opted to remain committed to the withdrawal of forces, and the administration reportedly has been in communications with the Taliban even as the situation in Kabul can only be described as "chaotic."

Then there is the fact that Biden has pledged to protect American citizens as well as those Afghans who have worked with the United States. It may be increasingly difficult to believe him, as the Taliban have sentenced the brother of an Afghan translator to death. The insurgent group, which has essentially taken control of the country and declared it to be the Islamic Emirate of Afghanistan, has accused the individual of aiding the United States and providing security to his brother.

CNN has reportedly obtained three letters written by the Taliban, and they have called for the individual'ss brother to attend a court hearing, while the third letter handed down a death sentence after he was found "guilty in absentia." It is now unclear if either the man or his brother is even still in Afghanistan. CNN has not identified the individuals to protect their identities.

"You have been accused of helping the Americans … You are also accused of providing security to your brother, who has been an interpreter," one of the letters read. "These court decisions are final and you will not have the right to object … You chose this path for yourself and your death is eminent [sic], God willing."

As CNN also reported, the letters certainly seem to contradict assurances Taliban spokesman Zabiullah Mujahid made at a press conference last week, as the group tries to project a more moderate image to the world.

"Nobody will be harmed in Afghanistan," Mujahid said at the time. "Of course, there is a huge difference between us now and twenty years ago."

It seems that based on the letters that the Taliban hasn't changed, and it remains as brutal as it was before the U.S.-led invasion, following the 9/11 attacks, toppled it from power. Moreover, the question should be asked why the United States hasn't protested if it is in fact in communications with the Taliban to demand that those who worked with coalition forces be granted amnesty.

For now, it seems that Biden will continue to cast blame, ignore the situation as it quickly becomes a humanitarian crisis, and yet somehow maintain the false claim that the buck stops with him.