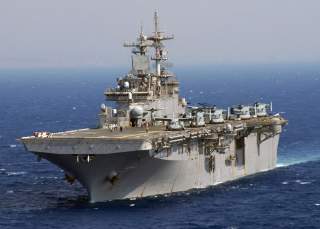 Along the Huangpu River in the Hudong-Zhonghua shipyards in Shanghai, the hull modules of two huge new vessels have been captured in photographs taken by passengers in overflying airliners. Then early in July 2019, ground-level images of the construction leaked onto Chinese social media.

Measuring the length of two-and-half football fields and estimated to displace between 30,000-40,000 tons once in the water, the vessels appear to be the first of three Type 075 Landing Helicopter Docks (LHDs), essentially moving naval bases that can carry dozens of helicopters and launch amphibious landing craft from their floodable well deck.

In 2017, the Type 075 was detailed (and speculatively illustrated) in a South China Morning Post article by Minnie Chen. It would be the first ship of its type to serve in the PLA Navy—and the largest deployed outside of the United States, which currently operates eight 40,000-ton Wasp-class LHDs and one 45,000-ton America-class ship.

The PLA Navy already has commissioned five smaller 25,000-ton Type 071 Yuzhao-class amphibious transport docks (LPDs), with two more under construction. These can carry hundreds of troops, with supporting tanks and armored vehicles, and up to four Type 726 air-cushion landing craft (LCACs) to ferry them ashore. Four SA-321 helicopters give the Type 071 a limited vertical lift capacity.

By contrast, the Type 075 will be able to carry thirty helicopters, six of which can be taking off or landing at the same time, allowing it to rapidly deploy troops and supplies onto improvised forward landing zones. Meanwhile, its well deck could still accommodate two LCACs to land armored vehicles and larger cargoes.

Chinese internet articles furnish additional unconfirmed details, including claims the Type 075 will be powered by a 65,000-horsepower diesel engine and has a maximum speed of 22-24 knots.

The Type 075 isn’t meant put itself in the line of fire, however. It reportedly will be only lightly armed with two 30-millimeter Gatling-style cannons and two short-range HQ-10 missiles launchers for close protection from incoming missiles and aircraft, meaning it would realistically depend on escorting vessels to provide layered air defenses. Given the increasing capability of modern anti-ship missiles, some question the viability of large vessels like the Type 075.

This begs the question: what roles could huge helicopter carriers play for the PLA Navy?

LHDs are a type of “amphibious assault ships”—vessels that help land and supply troops onto hostile shores. That’s a task a vessel like the Type 075 could perform very efficiently with its capacious hold and large helicopter wing.

These formations are foremost maintained with an eye to being able to credibly threaten an invasion of Taiwan, which Beijing considers a renegade province.

China also has disputes with Japan, the Philippines and Vietnam over other islands—and even fought two naval battles with the latter for control of the Paracel and Spratly islands in 1974 and 1988 respectively.

But the transport capacity to deploy Chinese troops on hostile beachheads is limited. Thus vessels like the Type 075 will significantly improve the PLAN’s amphibious-landing “bandwidth.”

Helicopters equipped with dipping sonars are particularly effective at detecting and engaging submarines. An LHD with abundant helicopters to deploy could provide a “bubble” of anti-submarine coverage and be deployed on missions to interdict likely submarine transit lanes, escort vulnerable task forces and convoys, and chase down suspicious sonar contacts.

This mission is particularly vital for the PLA Navy because U.S. and Japanese submarines have major advantages in acoustic stealth over their Chinese counterparts and would not have their freedom of maneuver constrained by long-range, land-based anti-ship missiles the way hostile surface ships would be. Thus, Chinese profiles of the Type 075 have stressed its application in anti-submarine warfare.

To a lesser extent, Airborne Early Warning (AEW) helicopters onboard LHDs could also provide forewarning of hostile aerial activity to the benefit of nearby ships. However, LHDs and their helicopters would depend on other assets to actually intercept aerial contacts.

In the hopeful absence of a major conflict with the United States, Chinese LHDs and their onboard helicopters would be extremely useful for disaster relief missions, expatriate or medical emergency evacuations, anti-piracy and smuggling patrols, and peacekeeping deployment. Such contingencies seem likely to occur as China’s commercial, political and military influence continues to expand across Southeast Asia, the Indian subcontinent and Africa.

Chinese sources have also noted the Type 075 could carry helicopters armed with air-to-surface missiles. This is undoubtedly true but must be appreciated in context: most helicopters lack strike range and survivability versus adversaries with significant air range defenses. However, in hypothetical littoral or archipelago-style battle spaces where the anti-air threat is more limited, maritime strike helicopters could usefully chase down hostile vessels, perform strikes against fixed positions, and provide air support for landed troops.

One of the early benefits of China’s warming relations with the West in the 1970s was the acquisition of French helicopters. China eventually began license manufacturing its own versions, the Z-8 (based on the SA-320 Super Frelon) and the Z-9, based on the AS-565 Panther, all of which are operated by the PLA Navy.

The three-engine Super Frelons and Z-8s are large and fast. Capable of carrying up to twenty-six troops at once, some are also equipped with torpedoes and dipping sonars for anti-submarine warfare, or specially adapted for search-and-rescue and medical evacuation roles.

The medium-sized Z-9 helicopter family includes models outfitted for anti-submarine warfare, and an AEW variant with a K-Band radar. While the PLA Navy lacks an equivalent to the U.S. Marine Corps’ Sea Cobra gunships, the missile-armed Z-9WA model could conceivably be adapted for shipboard operations.

However, the PLAN conspicuously lacks two types of aircraft that significantly enhance the combat power of other amphibious assault ships across the globe.

First, China has no tilt-rotor aircraft like the V-22 Osprey, helicopter/airplane hybrids with vertical takeoff capability of the former, and improved range and speed of the latter.

More importantly, the PLAN has no vertical-takeoff capable jump jets like the Harrier or F-35B, which would not only give Chinese amphibious carriers air defense capability but also greatly improve their surface-strike capacity. The PLAN will be particularly keeping an eye on F-35Bs deployed on Japanese—and likely South Korean—carriers. For now, there’s no indication China is seeking to develop such technically challenging (and often accident-prone) aircraft.

According to Rick Joe of The Diplomat, the lead Type 075 may launch late in 2019 or by mid-2020. All three of the initial flights may be launched by 2022 given the current apparent pace of construction, and Joe estimates additional LHDs, possibly of a revised and enlarged configuration, are likely to follow.