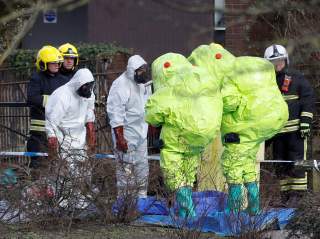 These chemicals are designed to obscure western intelligence satellites and recon aircraft from observing the action below.​

There have been couple of new features present in Russian military exercises this year. The first is the return of the chemical warfare. Not in the form of poison gases, but as a mean to mask friendly movements and actions from surveillance.

From the latest massive strategic nuclear forces drill in Kamchatka to the docks in the white sea and railway crossings in Ufa, the chemical warfare soldiers of the Russian army have been using their ARS-14 KM decontamination vehicles, that is based on the standard KAMAZ-43114 cross-country trucks, to lay thick screens of unspecified aerosols. These chemicals are designed to obscure western intelligence satellites and recon aircraft from observing the action below.

When combined with properly enforced security perimeters and smoke screens, that can be laid by specialized vehicles like the similarly Kamaz based TDA-3, Russian army is now able to add a further layer of confusion to it’s snap drills aka. maskirovka mobilizations. It will be next impossible to verify what equipment is loaded to the trains, airplanes, trucks and ships. The use of NBC-protection units to mask friendly actions, is also giving the otherwise underutilized units a new mission.

Another interesting vehicle that has begun to appear in numbers is the Listva mine-clearance vehicle that is the first variant of the Bulat APC, which entered service in 2013. Listva is an advanced contactless system that uses a ground penetrating radar to detect mines and then directs high-powered microwaves to destroy or disable them. It’s unknown if the system is capable of destroying all types of land mines and for example the unexploded ordnance commonly encountered in the battlefields.

The fourth vehicle is a far more conventional one, but the BPDM Typhoon-M is none the less an interesting departure from the Russian APC development path, that has been focusing on increasing the protection and firepower of the BTR-80 based vehicles. The Typhoon-M is optimized for rear area security with machine gun armament, thermal vision and integrated UAV capability. Russia seems to be taking seriously the rather unlikely event that a hostile special forces unit would attack Russian ICBM convoys moving through the endless taiga.