BAE Systems to Build 26 Amphibious Combat Vehicles for the Marines 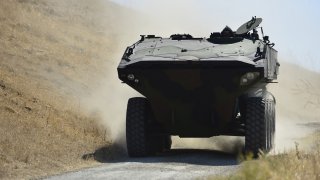 Last month BAE Systems' land and armaments business announced that it had secured a $113.5million contract with the United States Marines Corps (USMC) to manufacture 26 additional Amphibious Combat Vehicles (ACV). These would be built under the Low-Rate Initial Production (LRIP) phase of the program and would bring the total vehicle orders for the ACV to 116.

The USMC had selected BAE Systems along with its partner Iveco Defence Vehicles for the ACV program in 2018. The 8x8 platform, which offers a mix of open-ocean amphibious capability, land mobility, survivability, payload and upgrade options was selected to replace the Corps legacy fleet of Assault Amphibious Vehicles (AAV), which have been in service since 1972. The AAVs, which have also been used by various U.S. partners around the world, were also built by BAE Systems.

The ACV program dates back to 2015 when the Corps issued a Request for Proposal (RFP), and BAE Systems was awarded one of the two Engineering, Manufacturing and Development (EMD) contracts to produce 16 prototype vehicles. At the time of the award the platform had already undergone extensive testing including water and land mobility, survivability and ship launch and recovery.

"The ACV provides the most survivable and mobile amphibious vehicle to the U.S. Marines Corps for supporting the warfighters' ability to successfully execute their unique expeditionary missions," said John Swift, director of amphibious programs at BAE Systems. "This award further demonstrates our commitment to that mission, it's an important milestone for the program and represents a major step toward full rate production."

Multiple variants to the ACV are to be produced, and the current LRIP is for the ACV-P, the personnel carrier variant, which can embark 13 Marines in addition to a crew of three. Other models of the vehicle will include the ACV-C, a command and control variant; ACV-30, which will be armed with a 30mm medium caliber turret; and the ACV-R, a recovery variant.

All of the ACVs are designed to offer ship-to-shore objective capability, and each will be equipped with a 690HP engine that provides a significant power increase over the AAV. The ACV has a range of more than 335 miles on land and top speed in excess of 65 miles per hour.

The ACV will be part of the new Corps, which also announced that it will eliminate its entire tank force and cut a significant number of aviation units over the next decade in favor of land-based rocket artillery and unmanned aircraft. The goal of the USMC transformation is to create a more nimble strike force that could deal with potential threats from China in the Pacific Rim.