Bang For Your Buck: Is A Single F-35 Stealth Fighter Worth $90 Million? 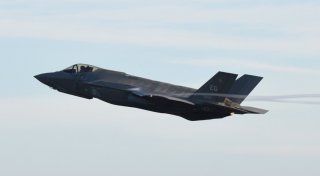 Here's What You Need To Remember: According to the Pentagon's annual report on Department of Defense programs, it was found that the F-35 had 873 unresolved deficiencies from ongoing issues with the guns on the USAF variant to other software problems. While many of these issues have been addressed it could still be too early to tell whether the F-35 is truly the best of the best, or just an expensive flying lemon.

In July 2015 a CNN headline pondered, "The F-35: Is the world's most expensive weapons program worth it?" In the nearly five years since, there have been nearly a dozen more headlines that ask the same basic question, is the trillion-dollar fighter program "finally" worth it—or is the F-35 an example of a military project that is simply too big to fail?

There is no denying that the F-35, also referred to as the Joint Strike Fighter, has been touted as the most lethal and versatile aircraft of the modern era. It is an agile aircraft and it has radar-jamming abilities, supersonic speed, impressive sensor fusion technology and stealth capabilities. There would be some that would say you can't put a price on perfection—but detractors say that the aircraft is far from perfect and moreover there is that hefty $1 trillion price tag!

According to reports from last September, each F-35A variant, including aircraft and engine cost around $89.2 million, while other variations of the fifth-generation fighter were even more expensive—the F-35B reportedly costs $115.5 million. While the total cost could be as high as $1.508 trillion for the life of the program, it could remain in service until the 2070s—while the dollar figures have also been estimated in 2070 dollars, a fact that needs to be put in perspective.

While the fact also remains that $1.5 trillion is a lot of money, it is worth noting too that the F-35 will replace numerous older aircraft while the capabilities of the F-35 vastly surpass current fourth generation platforms. The F-35 was designed to take on numerous roles in combat—and it could be a single platform that does what the A-10 Thunderbolt II, F-16 Fighting Falcon, F/A- 18 Super Hornet, and AV-8B Harrier are currently charged with. Many of those planes have also been in service for many years, and older aircraft are more expensive to maintain.

It is also far more cost-effective to operate fewer types of aircraft, plus it can streamline training operations and require fewer suppliers—both have financial benefits.

"With the F-35 program, Lockheed Martin has completely dominated the fifth-generation fighter market and moved it another place entirely," Sneller told The National Interest.

"The other that it has done is moved the whole technology of fighters forward and this includes not only the advanced engines and its stealth, but its integration of mission systems," said Sneller. "No other aircraft has that level of technological advancement inserted collectively onto a single platform. Is it worth the money – well, it is worth the gamble that was originally put out there if you like, and it has paid off with a large home grown market."

The costs could also be coming under control.

According to the official website from defense industry contractor, Lockheed Martin, the production costs have dropped approximately 60 percent, and for the eleventh consecutive year, the cost of an F-35A went down. Additionally, last October the Pentagon and Lockheed Martin finalized a $34 billion deal for the next three lots of F-35A jets, which brought the price down to below $80 million—a year earlier than expected—and the average price of the aircraft was expected to fall about 12.8 percent across all variants.

"It is also necessary to take a step back to understand that the United States isn't the only one who is buying the F-35, and there are about 11 other nations that are investing in the new fighter in various configurations," said Sneller. "Some countries have waited to buy it until the price has come down."

Given all those facts it could be argued the F-35 is worth the cost, provided it can perform as promised. However, the program hasn't only been plagued by cost overruns, but also technical issues that have slowed the project as well. As The New York Times noted last year, "yet, even as the program plows forward, unresolved technical issues have continued to emerge."

There have been reported weight problems, software glitches and even fuel capacity and flight distance. According to the Pentagon's annual report on Department of Defense programs, it was found that the F-35 had 873 unresolved deficiencies from ongoing issues with the guns on the USAF variant to other software problems. While many of these issues have been addressed it could still be too early to tell whether the F-35 is truly the best of the best, or just an expensive flying lemon.